One of the most innovative restaurants in Las Vegas is no more. Once, the Peruvian Nikkei-style restaurant from chef Ricardo Zarate located on the top floor of the Grand Canal Shoppes at Palazzo, shuttered on Saturday.

It opened in the spring of 2018 in the huge space formerly occupied by Emeril Lagasse’s Table 10. In my Las Vegas Weekly restaurant review published that May, I called Once the Strip’s most esoteric restaurant because the Latin-Japanese fusion that powered Zarate’s menu was so unique and delicious. The chef still operates restaurants in Los Angeles.

Wynn Las Vegas is pushing back the planned opening of the Delilah supper club to early summer 2020. The Las Vegas Strip version of the popular celebrity haunt in Los Angeles created by the H. Wood Group was previously planned to debut in May in Wynn’s Chairman’s Salon space, once occupied by fine dining restaurant Alex. 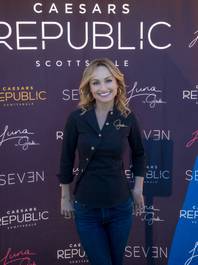 Celebrity chef Giada De Laurentiis is collaborating with Caesars Entertainment on two new restaurants … in Arizona. The groundbreaking for Caesars Republic Scottsdale was held this week and De Laurentiis was there to discuss her new concept Luna, as well as another outlet of her fast-casual Pronto, which first opened at Caesars Palace in Las Vegas. Giada at the Cromwell was the TV star’s first-ever restaurant. Caesars Republic is the first Caesars location in the country designed exclusively as a non-gaming hotel and it’s set to open in fall 2021.

El Segundo Sol at the Fashion show mall is celebrating its 10th anniversary this month by offer 10 Two-Bite Tacos for $10 on March 18 from 11 a.m. to 4 p.m. The tiny, tasty dish comes in various flavors and styles including mahi tacos with avocado-tomatillo salsa and braised pork tacos with caramelized pineapple. Loco Hour starts at 4 p.m., featuring $5.50 margaritas and $4 well drinks.

Vetri Cucina at the Palms continues its collaborative dinner series with Jon & Vinny’s Italian Takeover on March 30. James Beard Award-winning chefs Jon Shook and Vinny Dotolo of Jon & Vinny’s restaurant in Los Angeles will invade the kitchen at Vetri to cook up a four-course menu for $75 including marinara-braised meatballs, spicy fusilli in vodka sauce with basil and parmesan, polenta Bolognese and chocolate cake with vanilla custard. To make reservations, call 702-944-5900.

The lineup has been revealed for the Mad Craft Experience, the acclaimed culinary extension of the annual Great Vegas Festival of Beer, which celebrates its 10th year April 3-4 at the Downtown Las Vegas Events Center. Mad Craft takes place on night one, April 3, and will feature three competitions between local chefs and mixologists. Among those participating are Royden Ellamar from Harvest at Bellagio, James Trees from Esther’s Kitchen and Ada’s, Mike Minor from Border Grill and BBQ Mexicana, Matt Meyer from Served, Juan Villa from Jake & Eli and Michael Vakneen from Pop-Up Pizza. Tickets for Mad Craft are available at greatvegasbeer.com.

The Underground speakeasy and distillery at the Mob Museum has added new cocktails and mocktails to its bar menu to further complement its Prohibition Era creations. New drinks include Bang the Rum Slowly, with rum, pineapple, orgeat, lime, alchermes and bitters; the Plaza Antiqua, with mezcal, cinnamon-infused brandy, chocolate-infused Vermouth and spicy bitters; and the Clover Club, made with gin, Lillet, lavender, raspberry, lemon and egg whites. The Underground is open daily from 9 a.m. to midnight.