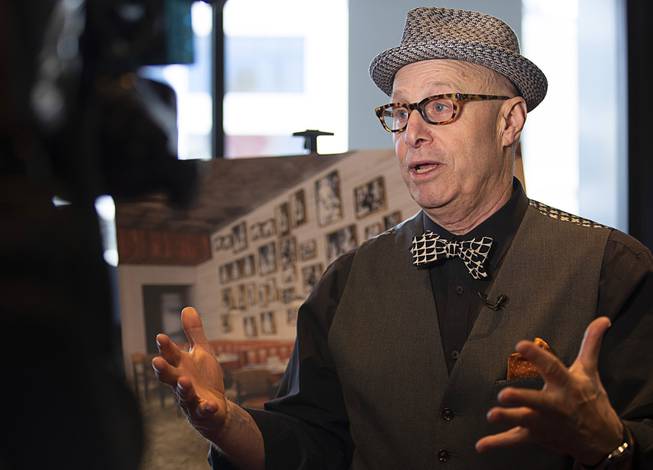 Paul Saginaw, co-owner of Saginaw’s Delicatessen, is interviewed during a news conference at D Las Vegas in downtown Las Vegas Wednesday, Jan. 22, 2020. Casino owner Derek Stevens unveiled the restaurant lineup for his new Circa hotel-casino which is scheduled to open downtown in December 2020.

Ask a Vegas visitor or a hungry local where to find the best corned beef sandwich in the city and the response will be mixed or muddled. The traditional delicatessen has been a casino fixture in previous eras but it’s not currently a prominent option. Next weekend, the storied Carnegie Deli at the Mirage will close for good.

Downtown casino mogul Derek Stevens is a deli fan and he sought out one of the founders of his favorite spot, the legendary Zingerman’s in Ann Arbor, Michigan, to create a new restaurant at his new casino. Paul Saginaw and his partners are opening Saginaw’s Delicatessen at Circa Las Vegas in December, one of five restaurants announced this week for the first ground-up casino resort built downtown in 40 years.

“He didn’t have to talk me into it. He had me at Vegas,” said Saginaw, who’s been visiting Las Vegas at least once every year since he was a teenager. “I love gambling, I love the people-watching, I go to shows and I just love the stimulus that’s going on.”

Saginaw opened Zingerman’s Deli in Ann Arbor—where Stevens attended the University of Michigan—with partner Ari Weinzweig in 1982, considered one of the best traditional European-Jewish delicatessens in the country. Saginaw’s will be his first restaurant project outside Michigan and he’s moving to Las Vegas this summer.

“I believe the key to a really good sandwich starts with the bread and I think that’s where [other delis] were all falling short,” Saginaw said. “We’re working with [local company] Bon Breads and developing the rye bread, and the corned beef is [Detroit-based] Sy Ginsberg’s corned beef. We opened in 1982 and I think by 1984 we had developed with him the brining recipe, and he’s been our supplier ever since. I’ll have his corned beef out there.”

Expect the perfect corned beef on rye and the ideal Reuben with Swiss cheese, sauerkraut and Russian dressing to be menu favorite’s at Saginaw’s, which will also serve matzo ball soup, onion rings, latkes, chopped liver, breakfast dishes and more.

An old-school operator serving old-school eats is a perfect fit for Circa. It reminds Saginaw of “the old Vegas where the owner was not a corporation or equity investment partners, the owner was actually there. That’s what attracted us. [Derek Stevens] has an intuitive understanding of who his customer is and he’s just great to work with.”

The bar at the new El Dorado Cantina at Tivoli Village.

Las Vegas Restaurant Week returns June 8-19 so mark your calendar and get ready for special menus and discount dining at many of the valley’s best restaurants to benefit the Three Square food bank. Last year, the event smashed previous records and allowed Three Square to provide approximately 780,000 meals to the more than 272,000 food insecure residents of Southern Nevada. This year’s “week” is actually 12 days so the community should be able to set a new mark.

The highly anticipated second location of El Dorado Cantina at Tivoli Village opened on Friday. The new 6,200-square-foot restaurant is open 24 hours a day seven days a week, just like the original location next to Sapphire on Sammy Davis Jr. Drive, and will be serving the same menu of authentic Mexican cuisine featuring sustainably sourced, organic, non-GMO ingredients. Plans to launch Sunday brunch service are in the works.

The iconic Piero’s Italian Cuisine located near the Las Vegas Convention Center since 1982 has appointed a new executive chef. Chris Conlon, a veteran of the local industry who’s managed kitchens for Charlie Palmer, the Light Group and the Hakkasan Group, has replaced chef Gilbert Fetaz, who retired to his native France after serving as Piero’s chef since the restaurant’s inception nearly 40 years ago. Menu favorites will not change but Conlon will be freshening things up and modernizing the offerings with new dishes. For more information or reservations, visit pieroscuisine.com.

The first-ever Italian Street Food & Beer Fest is coming to Eataly Las Vegas on February 16 from 4 to 8 p.m. There will be two 2-hour sessions where guests can indulge in unlimited tastes of traditional Italian street foods such arancini, meatballs and pizza at seven different stations, with each bite paired with local or Italian beers. Tickets are $60 in advance or $70 on the day of the event and more info can be found at eataly.com.

The recently expanded SkinnyFATS restaurant location at 6261 Dean Martin Drive will host the 4th annual Beer Zombies Festival on February 29 from 3 to 7 p.m. The event will feature more than 100 attending breweries including The Answer, Other Half, Nightmare Brewing, Great Notion and more, plus a specialty menu of SkinnyFATS bites including the Nashville hot chicken wrap, soft pretzels and green chili chicken nachos. Tickets start at $50 and are available at Eventbrite here.