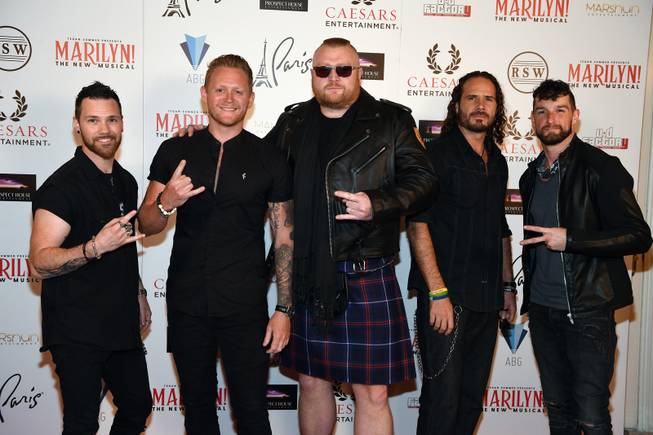 Members of Tenors of Rock on the red carpet during the grand opening of Marilyn! The Musical at the Paris in Las Vegas, Friday, June 1, 2018.

One of TripAdvisor’s top-ranked Las Vegas shows of the past two years is opening in a new venue this weekend.

“Tenors of Rock,” a group of five powerful singers with a full live band formed in the United Kingdom in 2010, has been thrilling Vegas audiences with its renditions of classic rock songs from the likes of Queen, Bon Jovi, Journey and AC/DC at the Harrah’s Showroom six times a week since January 2017. On Saturday, the show debuts at the Sin City Theater on the mezzanine level at Planet Hollywood, another resort operated by Caesars Entertainment.

Seth Yudof, whose UD Factory has produced the show since June 2017, said “Tenors of Rock” will have a bit of a different feel in the more intimate Planet Hollywood theater.

“At Harrah’s we took advantage of the high proscenium to go after an almost arena-like feel, but here we’re going for more of a Sunset Strip, rock-club vibe,” he says. “We’re putting in a new sound system and upgrading all the gear to match what the guys are doing, and we’re going to be adding in some moments where they get to play musical instruments.”

When Dai Richards, Jimmy Denning, Tommy Sherlock, Dan Schumann and Jonathan Williams hit the stage to perform those consensus classics, they really make each song their own; this is no impersonation show. They’re always putting a unique “Tenors twist” on each tune.

Harrah’s Showroom had become quite the crowded venue in recent months and currently hosts the Mac King Comedy Magic show in the afternoons and hosting the Righteous Brothers and the new “Elvis Presley’s Heartbreak Hotel in Concert” at night. “Tenors of Rock” will be sharing the Sin City Theater with only the classic Vegas female revue “Crazy Girls.”

“There’s so much going on at Planet Hollywood these days,” Yudof says. “It will be great to have them side-by-side with such big names like Criss Angel, Gwen Stefani and Def Leppard, and I think they’ll attract a different demographic than what they were getting at Harrah’s. I think we’ll be expanding their appeal.”

“Tenors of Rock” will be presented at 7:30 p.m. Saturday through Thursday at the Sin City Theater at Planet Hollywood (3667 Las Vegas Blvd. South, 702-777-2782) and more information can be found at caesars.com.