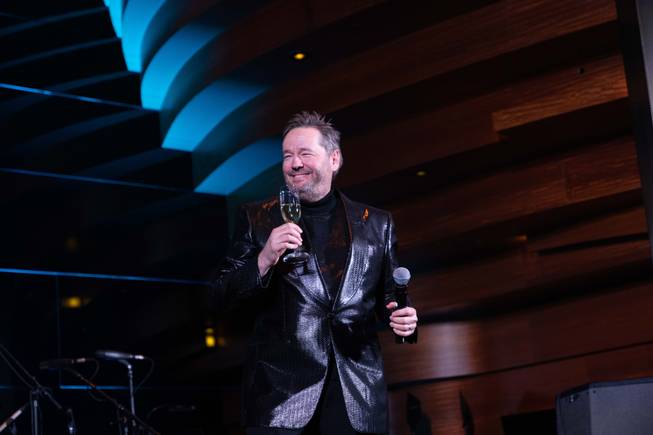 Terry Fator gives a toast during the after-party his 10th year as a headliner at The Mirage anniversary celebration in Las Vegas Friday, March 15, 2019.

Gov. Steve Sisolak’s extension on Sunday of the initial three-week statewide pause into mid-January did not come as a surprise considering Nevada’s rising COVID numbers. But there were Las Vegas Strip entertainment events on the schedule stuck in a holding pattern, waiting to see if they might be able to proceed under less restrictive rules.

Ventriloquist Terry Fator announced last month a special holiday season engagement at the New York-New York Theater, initially scheduled to begin during Thanksgiving weekend and then pushed back to an opening on December 17. MGM Resorts confirmed today that show is now canceled, as are the company’s other shows that just reopened in early November and had been selling tickets for return performances this week.

“In accordance with Governor Sisolak’s extension of the statewide pause, MGM Resorts will continue following all guidelines as set forth and will be canceling all live entertainment shows on sale through January 15,” read a statement sent by an MGM spokesperson. “The health and safety of our employees and guests is our greatest priority and we remain committed to the comprehensive safety programs in place throughout our operations.”

The company relaunched seven different shows at MGM Grand, Luxor and Excalibur on November 6, when restrictions allowed gatherings of 250 people. The pause initiated three weeks ago cut maximum capacities in theaters and showrooms down to just 50 people and the MGM shows went on hiatus while other smaller Strip shows like Tape Face and “X Country” at Harrah’s and “Absinthe” at Caesars Palace — which announced its own hiatus today — pushed on with live performances.

Fator’s shows at New York-New York, originally planned to run through New Year’s Eve, would have been his first performances since shuttering his 11-year headlining residency at the Mirage in the spring. A spokesperson for the performer said the shows will go on in January.