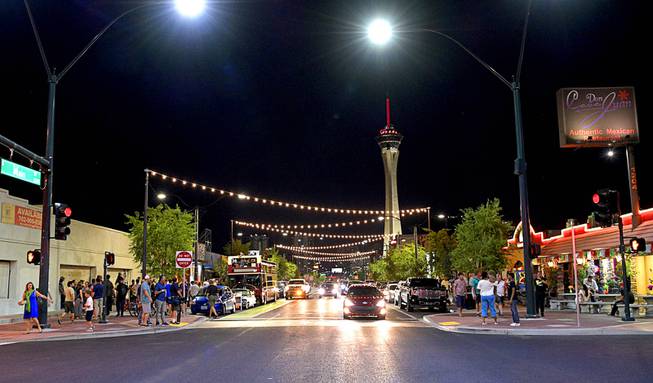 The Arts District in downtown Las Vegas continues to add retail options, but businesses lament the dearth of available parking.

Located on a leased lot behind ReBar and accessible only by an alley running parallel to Main Street, the FunkYard demonstrated how badly it was needed almost immediately: It hosted local music, spoken-word readings, burlesque shows, film screenings, charity events, even a gubernatorial stump speech by longtime Clark County Commissioner Chris Giunchigliani. And on nights there were no events, the FunkYard could be used for employee parking — both for ReBar and other businesses — which proved vital during the city’s two-year reconstruction of Main Street.

All of that ended recently, when Stonebarger received a posted notice from the city of Las Vegas to clear the lot completely. (Bizarrely, Stonebarger — who also serves as president of the Arts District Neighborhood Association — had just come from recording a neighborhood-booster segment for a video that would play before Mayor Carolyn Goodman’s annual State of the City address.) Other nearby dirt lots — which Stonebarger and other business owners had leased and insured for parking, a much-needed amenity in an area with approximately 150 street spots in total — were similarly cleared. Arts District customers began to be towed away, which left Stonebarger mortified.

“Every person that gets towed in the area, every person who can’t find parking because they’ve taken away all these organic dirt lots that they’ve allowed us to use for decades — they’re not coming back,” says Stonebarger. “We need those customers the most now.”

“Those parking lots down there really have never been technically supposed to be used for parking, and Code Enforcement came in and issued letters,” she says. “I honestly don’t have any history as to why that happened. I wasn’t aware of it and it’s not part of my department.”

The situation illustrates a problem that, currently, doesn’t have an immediate solution. The Arts District is growing fast — a brewpub, tapas bar, steakhouse and more will soon be joining a neighborhood that includes such bustling businesses as Esther’s Kitchen, Makers & Finders, Casa Don Juan, Jammyland, Velveteen Rabbit … and yes, ReBar, along with its new companion bar Davy’s. When customers and employees come to the neighborhood on a busy Friday night, those street spots fill up fast. And the city doesn’t have the land to build a municipal lot, which throws the problem back to the owners of those dirt lots.

For a business owner like Stonebarger — who, again, is only leasing the FunkYard lot — that upgrade process is going to be a very expensive, very close shave.

“I’m trying to thread the needle here,” he says. “Come May 21, I believe, [the FunkYard] will be need to be cleared. After that it’s a race until we can even consider getting it paved. I don’t have 50 grand to throw at this; the margins of bars and restaurants are so super thin at the end of the month. I may need to do another thing, like I did when I kicked off ReBar — presell some bar tabs, or some sponsorships, or some parking spaces. Maybe launch a campaign to ask our customers and people in the Arts District to actually create a parking lot, because the city’s not doing it.”

For her part, Stanley would very much like to create a parking solution for the neighborhood, but the city simply doesn’t have the land.

“Ultimately, there should be some sort of parking structure or structures down there. We are open to partnering with private property owners on getting that done, but nothing is really concrete at this point,” she says. “And I can’t stress enough that we want to work with the community. It’s not what we do to come in and put meters in and put all these parking structures in, in the name of the business down there, without actually having them participate. That’s what we’re doing right now. We are trying to figure out what’s down there, what we need down there and then figure out how to get it done.”

In the meantime, Stanley says, parking in the Arts District will remain free; there are no immediate plans to introduce the metered parking that surrounds the Fremont East district. And Stonebarger is looking for ways to incentivize customers to leave their cars at home, including possible drink specials for anyone who can prove they took a Lyft or Uber to reach ReBar. But that kind of thinking will only get these businesses partway to a solution.

“The thing that we could ask for is some leniency so that more people don’t get towed, until there’s a permanent solution with paved, lit city lots,” he says. “We need to be allowed to simply look the other way, like they’ve done for decades, when people park on these dirt lots. This whole thing is really at risk.”