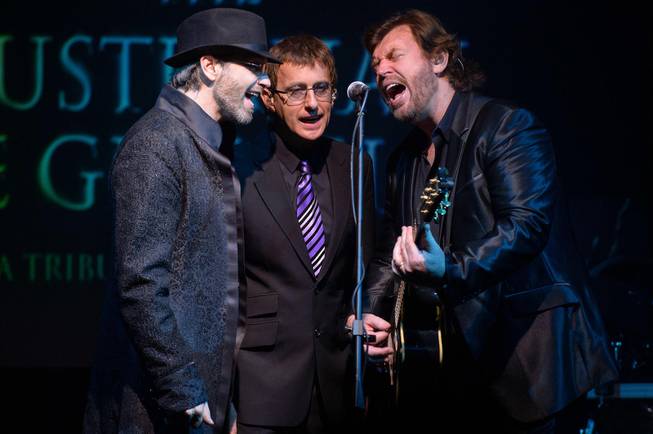 “The Australian Bee Gees show” has been stayin’ alive at the Excalibur since 2011.

The coronavirus pandemic has affected employment for so many Southern Nevadans in so many different, devastating ways, but it’s hard to make sense of the extreme challenges that most Vegas entertainers have faced. Several Strip shows reopened in the fall and were forced to close again quickly, meaning those performers and crews have worked for just two or three weeks over the course of an entire year.

That is the situation for “The Australian Bee Gees show,” a long-running musical tribute set to reopen at Excalibur on the Strip on March 15.

“It’s interesting to think that at first we thought it might be for six weeks, and you think about a proper lockdown and everyone wearing masks, but unfortunately that wasn’t the case and it kept spreading,” says Michael Clift, who co-created the show in 1996 and performs in the Barry Gibb. “We would have been devastated back then at the thought of being down for three months. If you told people then it would be a year, you’d probably have mayhem in the streets. But like everyone else, after initial panic and a bit of a scramble, we tried to remain positive. You want to get back to work but you want to be safe as well and keep your friends, family and loved ones from getting sick.”

The show reopened in the Thunderland Showroom, also home to popular male revue “Thunder From Down Under” which is also produced by SPI Entertainment, on November 6 along with several MGM Resorts productions on the Strip. But the winter spike in COVID infection rates and intensifying restrictions forced it to close less than three weeks later as it could not continue with a tiny audience of just 50 people. The venue traditionally holds 425.

“It’s been a long time coming and all these entertainers are dying to get back onstage,” says SPI founder Adam Steck. “That’s their lifeblood and it’s been a year. But the word is out and tickets are selling and we can’t wait to open up. It’s another cog in the Vegas entertainment wheel starting to spin and the more shows that open, the better it is for this town. We can’t wait to get that ‘Saturday Night Fever’ going every night.”

A native of Queanbeyan in New South Wales, Australia, Clift has been playing music since he was a child and was touring the country in a band called Red Tape when he started assembling what would become the ABG show.

“No one was really a doing a tribute to the Bee Gees back then and it really took off,” he says.

It toured Australia, Asia and the Middle East, and in the early 2000s the band set its sights on the United States. After connecting with Steck, it toured the U.S. starting in 2005, including some performances at off-Strip casinos like the Suncoast and South Point. The Excalibur residency landed in 2011 and SPI also maintains touring versions of the show.

Other Bee Gees tribute shows have popped up around the world in the 25 years since Clift and his crew started doing it, but Australian roots help differentiate the ABG show from the rest of the pack.

“The Bee Gees have always been popular in Australia since they got their start in Brisbane and we’ve always had that back-catalogue knowledge,” Clift says. “If we lived in the states and wanted to put together a show, we probably wouldn’t be as well-versed. And we always felt people wanted to push us to the disco stuff from the ’70s, but half of their career was this important music from the’60s and you can’t really do the show without it.”

The public has likely become more fully aware of the various stages of the Bee Gees’ career thanks to the HBO documentary “How Can You Mend a Broken Heart,” released last year. The timeless quality of the group’s music — not just the disco-era megahits like “Stayin’ Alive” and “You Should Be Dancing” — should help the ABG show rebuild momentum quickly on the Strip because these songs are so familiar.

“That’s one of the biggest things that’s changed in our lives, not being able to get together at sporting events, concerts and live shows. That’s what people are missing,” Clift says. “That’s the biggest chunk taken out. And people will want to embrace that again when it’s safe. The Bee Gees music is really fun and really heartfelt. There’s soul music as well as the disco stuff.”

And as Steck points out, “It’s one of those shows where people love to get up and dance.”

“The Australian Bee Gees show” will be back at the Thunderland Showroom at Excalibur on March 15, performing at 6 p.m. nightly except Tuesday and Saturday. More info can be found at abgshow.com.