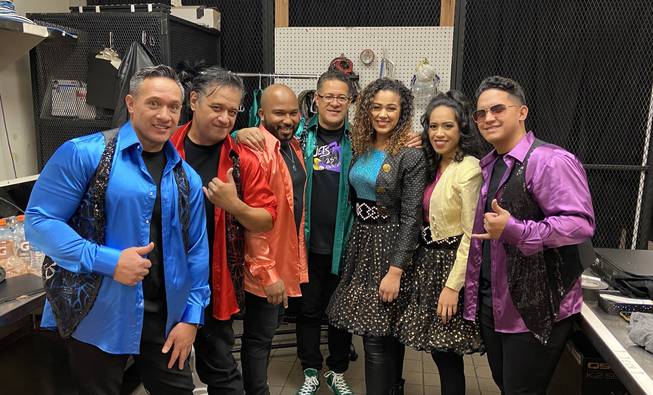 The Jets backstage at V Theater.

Musical nostalgia is a powerful force on the Las Vegas Strip and the Jets, the family band that topped the charts in the 1980s with “Crush on You,” “Cross My Broken Heart,” “You Got It All” and other dance-pop tracks and R&B ballads, are betting the hits from their favorite era will make for a great new Vegas show.

That was certainly the case on Thursday night when I visited the V Theater to catch their new show, “The Jets 80s & 90s Experience,” which opened at the busy Miracle Mile Shops venue on Dec. 17. The energetic group cruised through their own hits and an assortment of throwback tracks from the likes of Jody Watley, Madonna, Will Smith, Lauryn Hill, TLC, Van Halen, Bon Jovi, Bobby Brown, Whitney Houston, Prince and more. And all the dancing and singing was not contained onstage.

“This show gives us the opportunity to meet some of the fans who haven’t seen us in a while, and it’s fun to do something with a twist,” bassist and vocalist Haini Wolfgramm told me before the show. “We really love the ’80s and ‘90s and appreciate the chance to play more than just our own stuff.”

The Jets perform at V Theater Tuesdays through Saturdays.

Originally made up of eight members from a Tongan family of 17 brothers and sisters, the Jets broke through as a bar band in Minneapolis in the early 1980s. Their debut studio album went platinum in 1985 with four hit singles: “Curiosity,” “Crush on You,” “Private Number” and “You Got It All.” They went on to record three more albums in that decade while incorporating different family members into the act, but Haini said the group has only played sporadically in recent years. It was his idea to seek out a residency in Las Vegas.

“We’ve mostly been off the scene for more than 30 years, playing shows here and there, and a lot of have kind of been in retirement,” he said. “Sometimes we’ve done those nostalgia tours with other artists and a lot of us have different projects we’re working on. It’s the life of a musician. After you hit the top of your fame, you’re kind of trying to stay relevant or stay within the business somehow behind the scenes.”

Mega-producers Jimmy Jam and Terry Lewis — who, along with Prince, are considered the chief architects of the popular ‘80s “Minneapolis sound” that incorporated elements of funk, rock, pop and new wave — reached out to the Jets to participate in the Super Bowl Live musical programming in Minneapolis in 2018 and that gig seemed to spark the group’s interest in performing more regularly.

“They said you have to come because you are a part of that Minneapolis scene,” said Rudy Wolfgramm, who sings and dances up a storm and plays a bit of drums in the Vegas show. “Coming from the islands with our parents and ending up in Minnesota for 12 years, it was really special for us to be part of that [era] of music.”

Haini, Rudy and brother LeRoy are the three original Jets in the current show. Rounding out the band are LeRoy’s son Evan on drums and their younger sister Etivise and cousin Vanessa on vocals. Both women soared during Thursday night’s show, particularly Vanessa during a cover of Tina Turner’s classic “What’s Love Got to Do with It” — the Jets played their first big arena shows as Turner’s opening act — and Etivise on the Jets’ own slow jam “You Got It All.”

The Wolfgramm family’s musical traditions continue into the next generation. Haini and his wife Sarah have 14 children and the older seven have formed a band called 13 Crowns. Rudy said the Jets are hoping to feature that younger group somehow this year, perhaps in their own showcase at the V Theater or the nearby Saxe Theater.

“We’re just excited to be playing again,” Haini said. “We didn’t think it would be this much fun, but we also didn’t know there would be this much competition. There are so many shows here in Vegas and I hadn’t stopped in that much over the years to [see them]. The one thing we haven’t seen is an ‘80s or ‘90s type of show. I like Motown and all the Beatles shows and I’d love to see something more from my era. And our show will definitely evolve.”

“The Jets 80s & 90s Experience” is performed at 7 p.m. Tuesday through Saturday at the V Theater at the Miracle Mile Shops at the Planet Hollywood Resort (3663 Las Vegas Blvd. South, 866-932-1818) and more information can be found at vtheaterboxoffice.com.