The Jonas Brothers appear to be all about making good on promises. First, Kevin, Joe and Nick made good on the promise of their potential, evolving from their teenage success as a Disney-backed boy band into a true and talented mainstream pop act with an uncanny ability to top the charts. Their grown-up reunion yielded the surprise release of the brothers’ first Billboard Hot 100 No. 1 smash “Sucker” and its accompanying hit album, Happiness Begins, in 2019. Their music has quickly become ubiquitous.

And now, as big concert tours are returning to the United States after a long year without live entertainment on that scale, the Jonas Brothers are making good on their promise to make an impact in Las Vegas. They’ll kick off the Remember This tour with two performances at the Park Theater at Park MGM this week, Aug. 20-21), following through at the very same venue where they initially planned a mini-residency for 2020. Country superstar Kelsea Ballerini is hitting the road with the boys with tour dates extending across the country into the fall.

The Jonas Brothers’ 2019 Happiness Begins tour sold more than 1.2 million tickets and was expected to continue into the first half of 2020, including a nine-show run in April of last year at Park Theater that would have seen the band join the residency ranks of Lady Gaga, Bruno Mars, Aerosmith and Cher at the 5,300-seat venue. Once the pandemic set in and major entertainment events were canceled or postponed up and down the Strip, it didn’t look like any version of this unique engagement would come to fruition. But here they are. 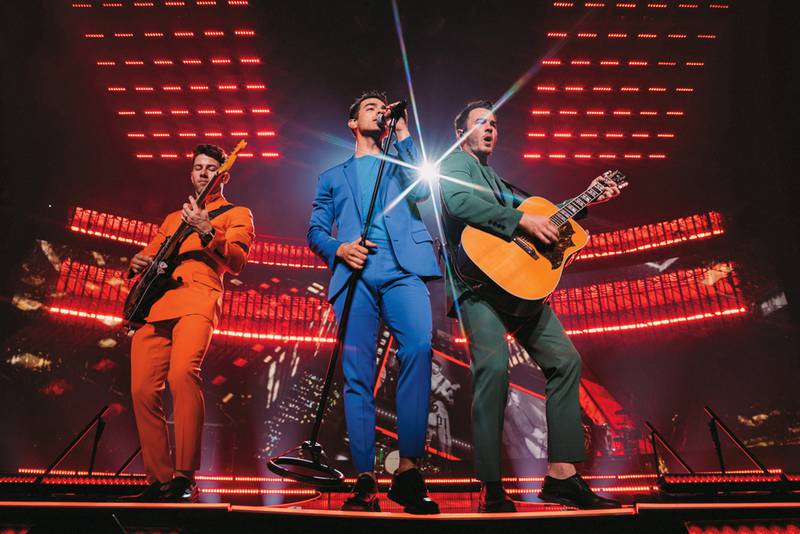 Those shows weren’t the only headlines the JoBros made in Las Vegas in 2019. Joe Jonas married Game of Thrones actress Sophie Turner in a surprise wedding at the Little White Wedding Chapel on May 1 of that year, hours after the brothers performed together at an awards show for the first time in a decade at the Billboard Music Awards at MGM Grand Garden Arena.

The band returned to MGM Grand for a tour stop in October 2019, and in January 2020 they visited Mayfair Supper Club at Bellagio to celebrate their drummer’s bachelor party.

Now that their Park MGM arrival is finally here, the Jonas Brothers have some extra ammunition for the two concert performances. In June, the trio unveiled “Remember This,” an upbeat anthem that was prominently featured in TV coverage of the Tokyo Olympic Games. And earlier this summer, they collaborated with DJ and producer Marshmello to release the ultra-catchy “Leave Before You Love Me,” a ballad with some serious ’80s vibes that the brothers performed during this year’s Billboard Music Awards at the Microsoft Theater in Los Angeles, which Nick Jonas hosted.

Crafting hooky tunes that get lodged in our collective consciousness is clearly one of the Jonas Brothers’ greatest strengths. Onstage charisma? They’ve got that, too. It’s a great formula for a fantastic concert performance in Las Vegas. The only question is, will two shows be enough?