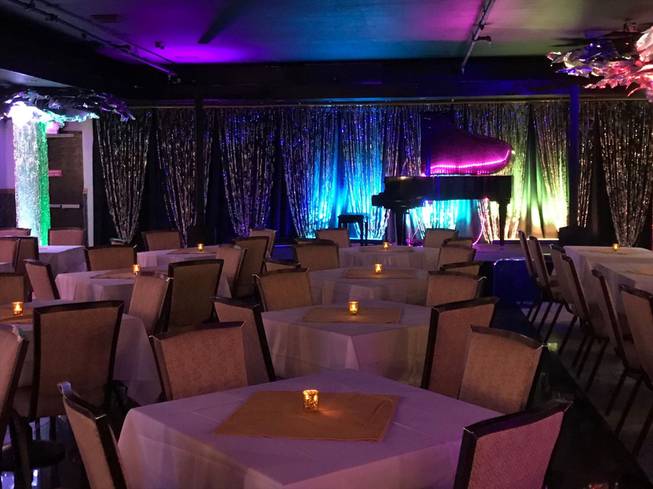 The Nevada Room will be ready for action this week.

Singer Amanda King has always incorporated meaningful musical history into her performances, and this week’s show is no different. She’ll bring an in-depth exploration of the early career of the legendary Ella Fitzgerald to the stage on April 25, Fitzgerald’s birthday.

“I bristle when people say, ‘You do Ella,’ because I don’t do Ella. I sing her songs and maybe I happen to sound like her a bit, but I’m not a tribute artist,” says King, whose vocal style, tone and phrasing certainly might remind listeners of Fitzgerald. “She really was the best and now that I’ve delved a little more into her life, I’ve discovered she and I do share so many personal things.

“It’s said that at big shows she would look out at the audience and say, ‘I hope they like me.’ It’s just amazing to think that she’s considered the greatest of all time but she never really knew it.”

Amanda King is set to open the Nevada Room this week.

When King looks out over her audience this week, it won’t be a large group, but it will be a very significant audience in the current Las Vegas entertainment landscape because it will be the first show at the Nevada Room. Located at Commercial Center on East Sahara, the freshly renovated venue contains a piano bar bistro and a supper club showroom designed to host various forms of musical entertainment and it’s an expansion on the Vegas Room, which has quickly evolved into an essential place for live music during the pandemic.

The Vegas Room got its start in 2019 as a catering operation for special events before developing into a supper club and listening room during the pandemic. It began offering intimate dinner and Sunday brunch shows in June for socially distanced audiences of around 40 people, welcoming top talent from on and off the Strip to showcase their skills. This weekend, singers Brett Pruneau (“Jubilee!”) and Ashley Fuller (Piazza Lounge at the Tuscany) will perform at the Vegas Room.

Owner Tom Michel says when his team had the opportunity to take over a recently shuttered nightclub space at Commercial Center, they leapt at the chance to expand on what had been accomplished at the Vegas Room.

“It gives us the ability to do more on the same foundation,” he says. “[The Vegas Room] is 2,100 square feet and the Nevada Room is 7,000 square feet, so it will be two different spaces. And what was originally on the footprint at the Nevada Room was a deli where the Rat Pack used to come and have pastrami sandwiches after going to the golf club.”

King has performed a handful of times at the Vegas Room and is thrilled to help open the Nevada Room. This time she’ll be backed by a trio of musicians, but for the venue, it’s just a warmup. Regular entertainment in the piano bar space and bigger shows with full bands in the showroom will make their way into the programming schedule in the coming months.

“I’m so excited and honored they are doing this with me. It’s super humbling and kind of amazing,” she says. “I love the Vegas Room and have seen so many transformative performances there. It really allows people to actually perform, to reach different depths and share their personal stories. And this [Nevada Room] is a little bigger but it’s still not a big concert hall, so you still get to see those personal, intimate performances.”

Tickets for the show are $35-$55 and a portion of the proceeds will benefit the Forgotten Song Foundation supporting local artists and musicians. For reservations, visit thenevadaroom.com.