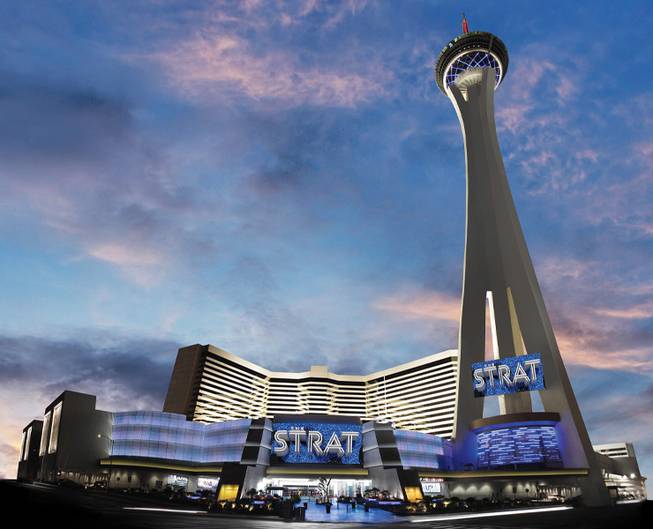 Expect a new slate of shows to be announced soon for the Strat Theater.

Fresh off a wholesale resort renovation totaling more than $100 million and back to full capacity operations, the Strat is now focusing on one of the most important and exciting ways to attract Las Vegas visitors — live entertainment.

“It’s arguably one of the best showrooms in Las Vegas,” said SPI founder and CEO Adam Steck. “I believe it was built for Danny Gans and was where he got his start, and it’s also been home to ‘American Superstars’ and the Claire Sinclaire show ‘Pin-Up’ as well as Frankie Moreno’s show and of course ‘MJ Live.’ It’s beautiful and it’s got a bit of the old style of Vegas with its banquettes and cabaret tables in front of the stage, and the sightlines are incredible.”

SPI has been operating the 425-seat Thunderland Showroom at Excalibur south on the Strip for years in partnership with MGM Resorts, and that room was renovated and upgraded in 2019. It currently hosts the long-running male revue “Thunder From Down Under” and another musical tribute, “The Australian Bee Gees show,” and on June 22, comedy magician Mac King will open at Thunderland after moving from Harrah’s.

Strat general manager Stephen Thayer said it’s the right company to help the resort become a true live entertainment destination, especially now that many travelers are returning to Las Vegas after the pandemic.

“Making changes to entertainment was always part of the plan as we went through and did this amazing transformation across the property and we’re thrilled to be working with Adam and SPI Entertainment,” Thayer said. “All across our entire property we’re seeing things rebound and come back to pre-COVID numbers and there is some of that Roaring’ 20s feel. People want to feel what Vegas used to feel like. They want entertainment and they want to escape what they lived in for the last year or so, so it’s an exciting time to be where we are.”

First up, Steck said, there will be some renovations to the 7,790-square-foot theater to enhance sound and lighting and back-of-house amenities for incoming performers, as well as the addition of some modern technology like LED screens on the walls. But he’s determined to keep the room’s classic Vegas vibes.

Discussions have started with the producers of “MJ Live” to determine whether it will continue there beyond 2021. Either way, expect several different kinds of shows to land at the Strat Theater in the coming months.

“We really have a wide plethora of entertainment we like to offer and the goal is to have resident shows, much like the others we do in town, performing all year long,” Steck said. “We also want to pepper it with some headliners to give the room some gravitas and make it more known, and we know we can attract some decent names.”

The Australian vocal quartet Human Nature officially ended its show at the Venetian in June after the pandemic paused the group’s four-year run in the 742-seat Sands Showroom. Considering the act has headlined in Las Vegas for 11 years and maintains an international audience, it could be a natural fit at the Strat Theater.

Steck did not specifically say whether Human Nature was being considered for a residency show at the Strat but did say anything is possible. It’s highly likely some new shows will be in the mix as well.

“It’s all about timing,” he said. “As a theatrical producer in Las Vegas, I’m always thinking and plotting shows and where they can go. I have a lot of concepts I think would be an amazing fit at the Strat.”

Beyond the theater, Thayer further confirmed last week’s announcement of the closure of “Celestia,” the circus-style production that opened in May 2019 in a 30,000-square-foot tent constructed just outside the northern portion of the Strat. He said the current plans call for the tent to be removed soon. It’s uncertain whether “Celestia” is looking for a new home in Las Vegas.