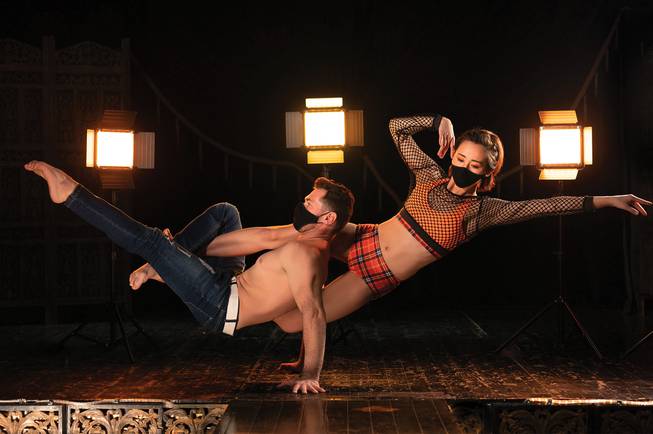 Intimate theatrical environments and proximity to immensely talented performers are two key factors that make live entertainment in Las Vegas so special. One of the newest Vegas shows and most intriguing endeavors of the COVID era maximizes both of those elements, but it’s not taking place in a fancy casino showroom.

“Apéro show” was born earlier this year, appearing out of the ashes of Cirque du Soleil’s shuttered “Zumanity” production, which ran from 2003 until 2020 at the New York-New York casino resort on the Strip. Henderson native Niccole Dunn, who ran the wardrobe department for “Zumanity,” teamed with her husband Jorge Salomone and dancer and acrobat Angelique Janowski, both of whom also worked on the Cirque show, to create a new company called Visionary Pack Collective and a new European-style cabaret show featuring other local artists from Strip shows that had been permanently closed or were waiting to reopen.

“Apéro show” made its debut on February 12 at the Baobab Stage, a small but charming and bohemian space at Town Square owned and operated by another Cirque du Soleil alum, Wassa Coulibaly. It’s running at 7 p.m. Friday through Sunday, just one of the eclectic weekly entertainment options at the venue and its adjacent Baobab Café, a full lounge, restaurant and bar space, and Wassa Wear Boutique apparel shop.

The show gets its name and inspiration from the French tradition of meeting with friends for evening drinks and food at a neighborhood bar or café. It also brings to mind the European concept of the aperitif, a quick drink before or after a hearty meal. While it’s fast-paced and interactive, “Apéro show” is more entrée than appetizer, a substantial show stocked with some of the most uniquely talented performers from the Las Vegas Strip. But it also feels light and fun, and not necessarily unique to Las Vegas.

Tsatsa Erdenebileg is a contortionist from Mongolia who performed for years in the iconic water bowl act in “Zumanity.” Her movements are even more mesmerizing on the Baobab Stage, especially now that audience members can watch the show from just a few feet away.

“We wanted to give the feeling that you’re seeing a lot for this tiny space,” Dunn said earlier this year when the show was first opening. “There are still aerial performances but it’s mostly about incredible body control. If you go to ‘Mystére’ and you sit close enough during the hand-to-hand [balancing act], you can see the sweat and the tiny body shakes, but 15 feet back, they just look like statues and it’s amazing. Here, you can see Roman [Tomanov] doing rollups and the iron cross and it’s just really cool to see on this stage.”

Tomanov, who has performed in “Absinthe” and “KÁ” on the Strip, comes from a multigenerational circus family and performs an impressive aerial straps act at Baobab.

This week, Tomanov, Erdenebileg and their fellow “Apéro show” artists will perform their routines for the first time without having to wear masks and that’s expected to make a big difference for the performers and the audience.

Rounding out the cast are Janowski on the aerial hoop act, Natsumi Miyazaki (of “Le Reve”) on the pole act, juggler Vladik Miagkostoupov (of “V – The Ultimate Variety show”), towering performer Damir Mouzdybaev (also formerly in “Le Reve”) and rotating special guest comedians bringing some laughs and pacing to the sultry, captivating production.

Larger-scale production shows are returning to the Strip soon, but other Vegas artists and creators have been developing and performing new material during the long, challenging pandemic year, and “Apéro show” is a terrific example of this creativity and ingenuity.