The biggest new development to hit the Strip in 2020 isn’t exactly on the Strip, but its impact will be felt along Las Vegas Boulevard for years to come, in a much greater way than its odd debut year allowed.

I have yet to set foot inside Allegiant Stadium, and that’s unfortunate, because covering everything that goes down and comes up on the Las Vegas Strip is basically what I do here. A few football fans made it to Allegiant for some UNLV games, but the Raiders finished their first season in Vegas without any of their new neighbors and supporters in the seats. The venue’s arrival was bittersweet across the board, but it remains the most significant entertainment event in Las Vegas in years, and while the pandemic prevented our new football team from truly connecting with the community, there have been many glimmers of the excitement that eventually will be generated by the stadium’s presence.

I felt it in September. It was my first real visit to the Strip in three months, not counting a drive-thru COVID-19 test at the Thomas & Mack Center in late July. I went to meet some visitors from New York at the New York-New York, specifically at Tom’s Urban, to have some drinks and food and watch the Raiders’ first-ever home game in Las Vegas against New Orleans. It was surreal to sit in a limited-capacity restaurant and bar about a mile from the empty stadium, and equally odd to be out and about after staying at home for so long.

But the energy was palpable. Other than the Tom’s Urban staff, I was surely one of very few locals there that night, yet the room was dominated by silver and black gear and fans cheering passionately for their team, the Las Vegas Raiders. If they couldn’t get into Allegiant, this was the next best thing, and the experience taught me a powerful lesson.

When people begin to return to the Strip in large groups once again—I’m talking about many more visitors than what we’ve experienced since casino resorts reopened over the summer—they’ll be more excited than ever to experience Las Vegas once again. And Allegiant Stadium isn’t the only new item on the agenda. Here are a few more destinations that debuted in 2020 and will still feel new for a long time, ready and waiting to entertain Vegas visitors in this strange interim phase we’re about to enter … 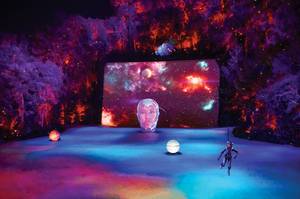 Lake of Dreams. The whimsical waterfront show at Wynn—viewed from patios at SW Steakhouse, the Lakeside seafood restaurant or the Parasol Down bar—always had a certain charm, but an epic upgrade unleashed in the fall re-created it as a singular Vegas attraction. With big music from Madonna, Frank Sinatra, The Chainsmokers, Sting, Lady Gaga and more—along with thoughtful, artistic use of technology and staging—the new Lake of Dreams feels exclusive and enchanting.

Mosaic on the Strip. The well-known freestanding building near the Showcase Mall that previously operated as Krave Nightclub, Empire Ballroom and Club Utopia opened as a versatile new theater in February, fought through ever-changing COVID-19 restrictions and has kept its shows going, including musical tributes Queens of Rock and Piano Man and popular male revue Aussie Heat. Future plans include a reboot of the unique A Mob Story production that originally opened Downtown at the Plaza.

NebulaZ. The Adventuredome at Circus Circus opened a new thrill ride toward the end of the year, a chaotic, clockwork-like contraption called NebulaZ that spins riders around in eight different pods and looks like its four arms might crash into each other at any moment. The three-minute ride is the ’dome’s first new arrival in seven years, and it’s open to anyone more than 42 inches tall.

PizzaCake. The Strip can always use more tasty, affordable eats with street access. Celebrity chef Buddy Valastro’s New Jersey-style pizzeria and cake shop at Harrah’s is fast and fun, and at $6, the cheese slice might be the best “cheap” bite in the area.

Resorts World. I’m cheating a bit. This magnificent megaresort won’t open until the summer, but if you haven’t driven or walked past the Resorts World site in months (or years), it’s pretty exciting to see the different structures coming along and maybe catch something crazy on a huge hotel tower video screen facing the Strip. Nothing builds anticipation like a brand-new Las Vegas casino, and it’s hard not to feel the vibrations when you get close to this one.