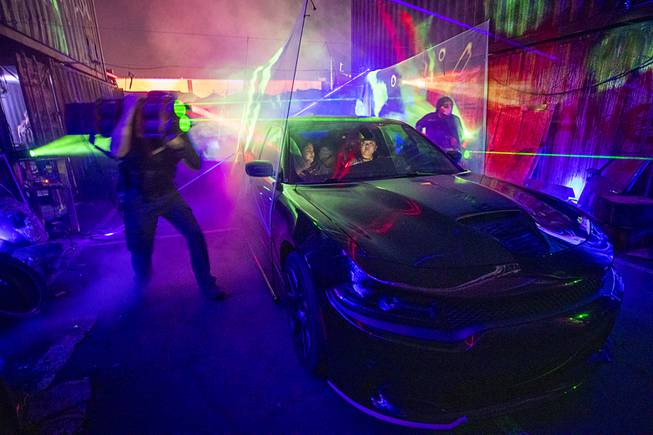 Women watch from their car during a performance at HallowheelsLV, Saturday, Oct. 17, 2020. The drive-thru “haunted house” runs through Halloween.

You never have to leave your car for this haunted experience in Las Vegas.

The vehicle is parked between stacked steel storage containers, as projections of ghosts and spiders crawl on the front window courtesy of a three-dimensional light projection.

There are sounds of gunshots and mayhem, all of which are pumped into the vehicle through the stereo system. Out comes a ghoul dressed in all black.

The driver is made to believe they are attempting to survive a zombie invasion at HallowheelsLV, a haunted drive-thru experience at 2330 Industrial Road behind the Strip. Because of the pandemic, the October tradition of walking through a haunted house has been altered to a spooky car attraction.

The show opened Oct. 8 and has received mixed reviews, with criticism coming from haunted house snobs whose out-of-touch expectations were to be dragged out of their car or lifted off their wheels, said Emiliano Palumbo, who produced the haunted experience.

But there’s only so much you can do to scare people inside of their cars, he stressed. And HallowheelsLV poured all the special effects into the show they could manage while operating under a permit approved prior to any loosening of coronavirus restrictions.

“We decided a regular-style, walk-through haunted house was extremely difficult. It’s not a standard haunt,” Palumbo said. “It’s more of a Halloween-themed show. We needed to bring the guest in as part of the show. You’re central to the entire story that’s about to unfold.”

HallowheelsLV had to submit its plans to the state and county for approval to open during the pandemic. With the exception of rolling down the vehicle window to pay and get instructions, it’s a contactless experience for the customer.

Up to 12 actors participate in the show nightly as zombies, including two whose job is to sneak up on cars. Additionally, there’s a handful of technicians manning strobe lights and other special effects.

It’s $54.99 per car to go through the experience, which lasts about 20 minutes. A percentage of the proceeds go to Backstage Hope LV, an organization dedicated to helping struggling technicians and entertainment industry professionals amid the pandemic.

“A lot of these people have been out of work since February and March,” Palumbo said. “Our only really major business goal was to be able to hopefully break even and also be able to make enough to make some donations.”

Keegan Stalcup, a HallowheelsLV actor who has been out of work since the pandemic hit, said he would participate even if he wasn’t being paid because it’s a chance for him to do what he loves.

Stalcup, whose show character searches for water and materials to survive the apocalypse, had never been through a haunted house before acting in the show. But he’s a science fiction nerd who loves futuristic tales of the world ending, meaning the haunted experience was an ideal match.

“I’m a geek and I’ve grown up with sci-fi my whole life and there’s a really morbid part of me that wants to watch an apocalypse, but I really don’t. The world is a great place to live in — I don’t want it to end,” he said.

Stalcup said the experience of scaring people changes with each driver and passenger. He said some people seem really tense, while others are harder to shake.

“You can tell from the outside of their car that this person is going to be tough to scare,” he said.

Jason Creager went into the experience with low expectations — after all, he was sitting in the controlled environment of his tinted-window car. Still, he was amazed at the experience.

“I was impressed by the whole thing, maybe because I understood what’s going into it. They’ve fulfilled the design parameters of what you can do really well. It involves a story not just a collection of gags,” he said.