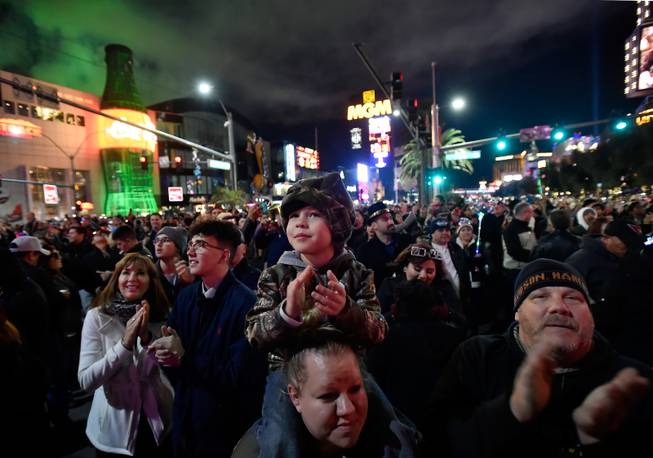 When the clock strikes midnight in this festive tradition, tens of thousands of fireworks uniformly spark the chilled Las Vegas sky as throngs of revelers toast, hug and kiss their way into a new year.

Pop stars will delight Strip audiences, while other musicians will pluck, thump and press on their instruments from outdoor stages on Fremont Street — a New Year’s Eve spectacle like few others.

But to maximize the joy and avoid hiccups, municipal and public safety officials, organizers and non-government organizations have outlined dos, don’ts and in-betweens.

At least by the standards of the Las Vegas desert, temperatures will dip into uncomfortable levels. The National Weather Service is projecting temperatures to plunge from the mid-40s by 6 p.m. to a biting 35 degrees at midnight.

People should expect a “pretty crisp night,” meteorologist Alex Boothe said Friday, noting that the up-to 12 mph wind projection could gust into the 15 to 20 mph range.

Planning on dressing warm is obvious, but Clark County Fire Department Deputy Fire Chief Jon Wiercinski also reminded the more than 375,000 revelers to think about their feet as plenty of walking will be in order.

Hydration also is key, he said.

Curfew and other rules

A curfew intended to keep children (under 18) away from the Strip will kick in at 6 p.m., Metro Police said. Attendees of America’s Party Downtown must be 21 and older, and will be carded.

Cleared from all traffic, Las Vegas Boulevard will be open solely to pedestrians by about 6:45 p.m., according to Metro.

(Strip outdoor activities are free while organizers downtown are charging $45 a person).

The Strip and exit ramps at Interstate 15 leading onto it will begin shutting down at 5 p.m. with completion expected by 6 p.m., Metro said.

At 5 p.m., I-15 off-ramps leading from Tropicana Avenue, and Flamingo and Spring Mountain roads will begin closing.

At 5:45 p.m., westbound traffic onto the Strip will begin shutting down.

From 6 p.m. to 6:45 p.m., streets, roads and alleys leading to Las Vegas Boulevard — between Sahara Avenue and Mandalay Bay Road — will be closed.

Between 6:45 p.m. and 7 p.m., all moving walkways, elevators and escalators on Las Vegas Boulevard will be shut down, and pedestrians will be allowed on the boulevard.

The festivities typically subside by 1:30 a.m.

The cleanup will begin about 30 minutes later, and by 3:30 a.m., road restrictions will begin to be lifted.

Clark County Sheriff Joe Lombardo said Thursday that authorities hadn’t identified any threats in the valley, but safeguards are in place.

A $9 million investment from the Clark County Commission this year was used to install 1,600 bollards to protect Strip pedestrians.

Revelers will see Nevada National Guard members, an increased amount of police officers, K-9 units and — if they glance upward — might spot overhead police snipers, according to Metro. Federal resources and Fire Department personnel also will be there.

Suspicious activity reports should be directed to uniformed officers or to 702-828-7777.

Consequences for drinking and driving could be expensive. And that’s if motorists are lucky and only get arrested before they hurt themselves or others.

There will be increased DUI patrols to include a newly formed strike team dedicated to spotting impaired drivers, Lombardo said.

No ride? No excuse to drive under the influence.

Regional Transportation Commission of Southern Nevada buses will offer free rides on its 39 fixed routes from 6 p.m. Monday to 9 p.m. Tuesday, plus extended service hours for several of the routes, RTC said.

AAA is offering its Tipsy Tow program from 12 hours beginning at 6 p.m. Monday, the organization said. A fleet of tow trucks will provide a ride home to the motorist, a passenger and their vehicle for free (for up to 10 miles).

“AAA wants motorists to send off 2018 on a high note by ringing in the New Year safely,” said Michael Blasky, AAA Nevada spokesman, in a news release. “We urge New Year’s Eve revelers to have a sober ride home lined up before the ball drops.”

By the end of the celebration, 80,000 fireworks would have gone off on the Strip and 15 tons of trash will sit, ready to be collected by a Clark County crew that will also put away the 4,000 metal barriers installed.