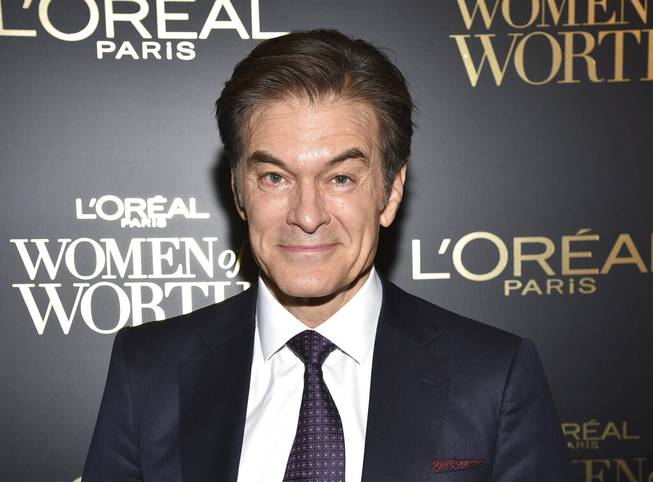 This Dec. 4, 2019 file photo shows Dr. Mehmet Oz at the 14th annual L’Oreal Paris Women of Worth Gala in New York. Oz says he misspoke during a Fox News Channel appearance this week where he said reopening schools was a “very appetizing opportunity” despite the coronavirus epidemic. In a Twitter post late Thursday, April 16, the heart surgeon and television talk show host said he recognized his comments had confused and upset people, and that was never his intention.

NEW YORK — Two television doctors — Dr. Oz and Dr. Phil — are finding themselves trying to explain comments they made about coronavirus restrictions during appearances on Fox News Channel this week.

Mehmet Oz says that he misspoke in an interview with Fox’s Sean Hannity, when he said reopening schools was a “very appetizing opportunity” despite the coronavirus pandemic.

Phil McGraw, another daytime talk show host who, like Oz, catapulted to TV fame as a protege of Oprah Winfrey, received social media heat for comparing coronavirus deaths to those caused by swimming pool and automobile accidents.

Oz, in a Twitter post late Thursday, said that he recognized his comments had confused and upset people, and that was never his intention. The heart surgeon talked with Hannity on Tuesday about ways to get “our mojo back” during the outbreak and mentioned schools, which are largely closed across the United States.

“I just saw a nice piece in the Lancet arguing that the opening of schools may only cost us 2% to 3% in terms of total mortality,” he said.

“You know, any life is a life lost, but to get every child back into school where they are being safely educated, being fed and making the most out of their lives with the theoretical risk on the backside might be a trade-off some folks would consider,” he said.

It’s not clear exactly what he was trying to say — if he meant that a certain number of deaths was worth the benefit of schools resuming — and his representative did not immediately offer a clarification on Friday.

While not a staff member at Fox News, Oz has made frequent appearances on the network since the beginning of the outbreak.

In his Twitter message, he said that he’s spent his career fighting to save lives by minimizing risk. But he’s constantly being asked how people can get back to their normal lives.

“To do that, one of the important steps will be figuring out how to get our children safely back to school,” he said. “We know for many kids school is a place of security, nutrition and learning that is missing right now.

“These are issues that we are all wrestling with and I’ll continue to look for solutions to beat this virus,” he said.

McGraw appeared on Laura Ingraham’s show Thursday. He pointed out the number of people who died because of cigarettes, auto accidents and swimming poll accidents and noted that those didn’t cause any lockdowns.

“The fallout is going to last for years because people’s lives are being destroyed,” he said. Ingraham has been among the television personalities who have pushed for a plan to reopen the country.

In an online message posted Friday, McGraw said he used bad examples because they were not contagious diseases. He also said he incorrectly stated the number of swimming pool deaths.

“If I offended people’s sensibilities last night with my examples, then erase those,” he said.

McGraw urged listeners to follow guidelines from health experts and government leaders. He said he was trying to express concern about the mental health and economic impacts of shutting much of the country down.