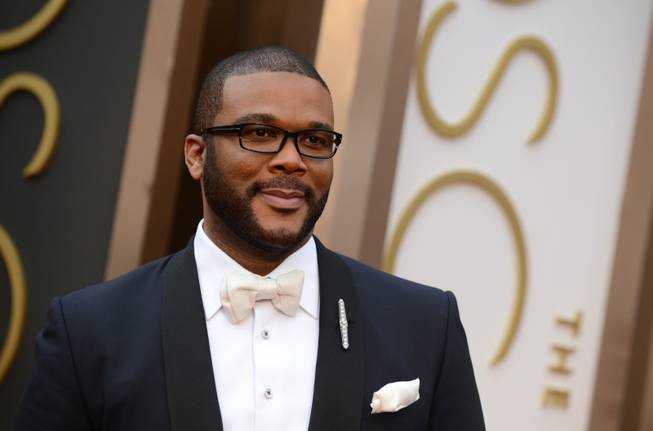 Tyler Perry arrives at the Oscars on Sunday, March 2, 2014, at the Dolby Theatre in Los Angeles. (Photo by Jordan Strauss/Invision/AP)

NEW YORK — The lack of diversity and notable snubs in this year’s Oscar nominations left Tyler Perry annoyed, but he says it’s not worth getting upset because it’s a system that is not going to change.

“There is no need in going back and forth, or fighting, or protesting. It is what it is. This is how it is in Hollywood, and it’s how it will always be,” Perry told The Associated Press on Monday hours after the nominations were announced.

Not only were there no female nominees in directing for the 87th time in Oscar history — a direct snub to Greta Gerwig, director of “Little Women,” as well as several other worthy candidates. There was also only one person of color, Cynthia Erivo, among the 20 acting nominees. Golden Globe winner Awkwafina (“The Farewell”) was denied a chance at an Oscar. Globe nominees Jennifer Lopez, for her role in “Hustlers,” and Beyoncé, for original song ”Spirit” from “The Lion King,” were also overlooked.

He added that he didn’t “know what all of the hoopla is about.

“It doesn’t have anything to do with what I’m doing as much as it is — I’m just gonna do what I do and just see what happens,” Perry said.

The actor-writer-director created Tyler Perry Studios as a production facility, not only for his television series and film projects but also to provide an alternative to Hollywood. At 330 acres (133 hectares), it’s one of the largest production facilities in the country. Production on such films as “Black Panther” and the upcoming “Bad Boys for Life” has been done there. It has also recently hosted a Democratic presidential debate and the Miss Universe pageant.

Perry’s newest film, “A Fall from Grace,” tells the story of a divorced woman looking for love. She finds it and marries, but her short-lived joy turns violent, and she finds herself fighting the legal system for her freedom.

“I don’t know if it’s a departure as much as … people think it is. People in Hollywood always want you to stick to a certain genre or a certain thing, and there are a lot of different things that I like to do. So, this is a thriller that I was just excited about doing something different.”

He says he wanted to tell a story about a man meeting a woman, “ratcheting that up, and mixing my version of a thriller with that,” Perry said.

The movie stars Phylicia Rashad, Cicely Tyson and Crystal Fox, who stars on Perry’s OWN series “The Haves and the Have Nots.”

“A Fall from Grace” premieres Friday on Netflix.