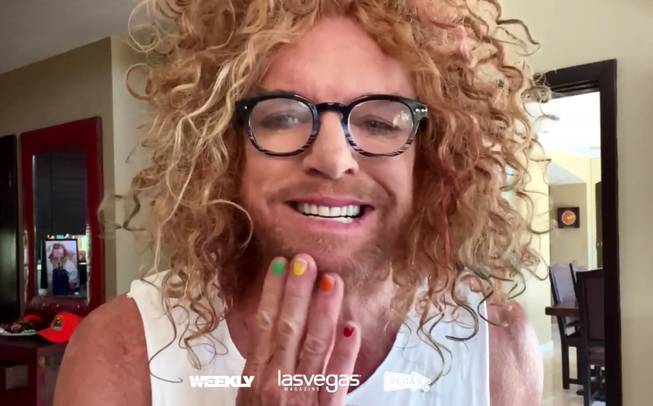 While his wildly successful show is on hiatus due to the coronavirus, Carrot Top is still there for his fans, recording a video exclusively for the latest edition of “Vegas at Home.”

As Las Vegas residents wait for the end of the COVID-19 quarantine, that feeling of connectedness is more important than ever.

Just because we’re all social distancing doesn’t mean we can’t still feel included in all the city has to offer. It’s in that spirit that Greenspun Media Group launched “Vegas at Home,” a video series featuring Strip entertainers, chefs and much more.

The videos are our way of creating smiles, not just in Las Vegas but across the globe; after all, we will eventually reopen for business, and we want to remind everyone of the amazing offerings that await them when they return. The videos have been edited by Sun Media Productions.

“We are thrilled with the response from the community on our ‘Vegas at Home’ series. We are so proud to bring people joy during this hard time,” said Samantha Petsch, the GMG events manager who has coordinated with the personalities to participate in the series. “We can’t thank Sun Media Productions enough for their help on bringing this project to life.”

The series currently features 15 episodes, but there are plenty more to come. In the meantime, enjoy these small pieces of Las Vegas life. If you need a reminder of why our city is tops in tourism, it’s all here.

Magician Kramer is seriously scary at sleight-of-hand. She’s made huge fans of Penn & Teller, not to mention anyone who’s seen her show at the Westgate Las Vegas. In her segment, Kramer shows off her skill and demonstrates an unorthodox way of selecting your next in-home activity. Are you watching closely?

This Aussie quartet that performs at The Venetian in “Human Nature Sings Motown and More” have one of the most beloved shows in town. Their charisma will win over even the most jaded listener, and their harmonies are sublime. They “got together” virtually to give us a small snippet of what they’re capable of. Yes, it’s short, but that’s the show business motto: Always leave them wanting more. And you will.

The new Bally’s show “Extravaganza—The Vegas Spectacular” is so new very few of you have even seen it yet. But all the more reason to give you a sneak peek. Several acts from the show offered us videos, and the first is X-Treme Brothers, a hand-balancing act that will show you that, as much time as you spend in the gym, it probably isn’t enough.

When Moonen owned and operated RM Seafood and Rx Boiler Room at Mandalay Bay, he was easily one of our favorite chefs in town. Those restaurants are now closed, but Moonen has lost none of his expert touch, as he demonstrates with his wife, Roni, as they prepare a paella that’s … well, you should see for yourself. Prepare to hear a rumbling—that would be your stomach.

We’re sure that many of you are missing your time at the gym and trying to find ways to stay active and in shape. Worley, one of the dancers in “Chippendales The show” at Rio, has some tips to get you started. No weights? No problem. Just look in your refrigerator!

The workout continues, courtesy of Romas, producer and star of “Sexxy: The show” at Westgate Las Vegas. This woman is a workout fanatic, so if you’re looking for a great routine, look no further. But please: Remember to limber up first.

Here’s another video courtesy of “Extravaganza—The Vegas Spectacular” at Bally’s, but this time the performer is a ventriloquist, with a dummy with absolutely no filter. Or is it the ventriloquist who has no filter? We’re confused.

The word “legend” gets thrown around a lot these days, but Frank Marino definitely qualifies for the title in Las Vegas. In addition to performing here in numerous shows for more than 30 years, drag queen Marino has helped pave the way for RuPaul and countless others. His segment of “Vegas at Home” is a bit bittersweet, as he takes a trip to places he used to perform—some of which no longer exist. But Marino is still here and going strong.

Hopcraft, the executive chef at STK at The Cosmopolitan, knows how important comfort is to everyone right now. And what’s a better comfort food than chicken pot pie? Just make sure to have some vodka handy while cooking.

One of Las Vegas’ longest-running shows is “Fantasy,” and Yesi, its dance captain, is a huge part of the show’s success. Check out her dance tutorial, and then get moving!

What’s more important at this time in history than a sense of humor? Luckily, as this video shows, Scott Thompson, aka Carrot Top, still has his and then some. We’d warn against trying his drinking game (unless you’re really brave), but we can completely get behind his “signature drink.”

The VP of Event Productions at MGM Resorts International since 2018, Winer is an event planner extraordinaire. And even if you can’t currently invite anyone over for an event at your home, you can start preparing. Winer gives some great tips.

We don’t know about you, but we just can’t get enough of cooking videos. Thomas, the executive chef of downtown Las Vegas restaurant Therapy, walks you through a great twist on Panzanella skewers.

What’s that you’re saying? You need to find a new hobby to help pass the time? Then you don’t want to miss this episode featuring juggler Alex Traisci, who’s been making audiences howl through 1,000 performances of “WOW—The Vegas Spectacular” at Rio. Just give yourself a lot of room and start with something that won’t break a window if you mess up.

A German doctor recently noted that drinking whiskey can combat the coronavirus. Sure, it’s debatable at this point, but until it’s disproven, make some cocktails! And Chris Gutierrez, lead bartender at Corduroy on Fremont East, has a great recipe for an Old-Fashioned.