Thumb through guitarist and Las Vegas headliner Carlos Santana’s memoir, The Universal Tone: Bringing My Story to Light, and you’ll find he’s one of the most enigmatic figures in rock music. He’s part rock star, part spiritual guru, with a memory of the ’60s, ’70s and Woodstock that might be clearer than any of his contemporaries. “I see the people, I smell the weed,” he writes. “I feel the guitars I played in my hands and can hear the sounds each of them made.” But more than simply mapping out the history of his youth, his band, and his musical journey, The Universal Tone is also Santana’s ode to his musical heroes, many of whom he ended up meeting and building friendships with, including John Lee Hooker, Alice Coltrane, Buddy Guy, Wayne Shorter and Miles Davis, among several others. 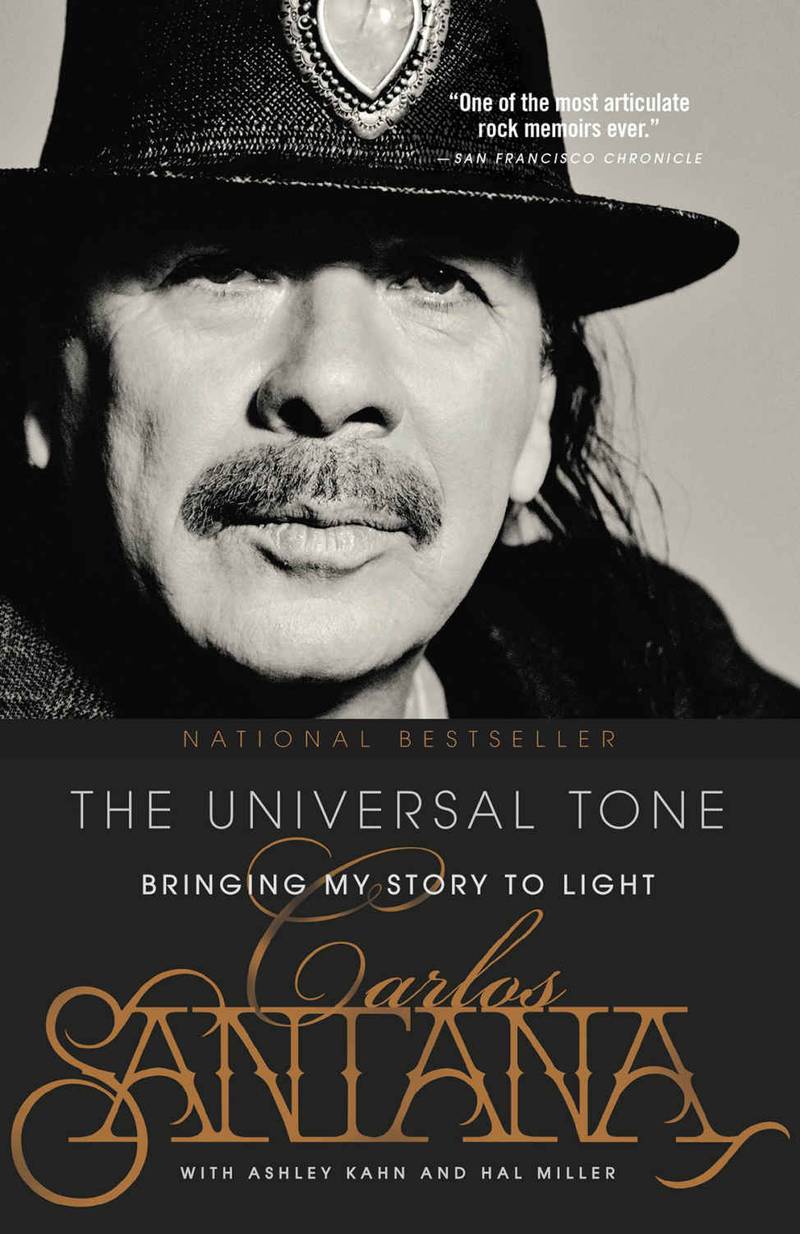 Santana wants to tell you all of those stories, and he knows that’s why you’re probably interested in the book, but before he gets into the nitty gritty of his musical and personal life, he wants you to understand what made all of his success possible: The Universal Tone. If you’re wondering what that means, there’s no way to fully describe the concept simply and accurately, but it’s basically Santana’s idea of balancing one’s spirituality, emotional intelligence, and ego. Moreover, Santana thinks of the phrase as the art of letting go, allowing himself to be a conduit for elevating people’s consciousness through music. “The Universal Tone is outside of me, and it’s through me,” he writes. “I don’t create it. I just make sure I don’t get in its way.” And it’s not just musicians who can wield The Universal Tone, but the guitar is Santana’s way of communicating its message to others.

Spiritual musings and aphorisms are all over the book. And while spirituality is integral to understanding Santana’s character, that’s not why you’re reading. You want to hear the rock ’n’ roll stories. He describes living in San Francisco during the late-’60s and how the music scene exploded, and he talks in detail about Woodstock, telling the story of how he dropped acid at the festival and consequently had the hallucination that his guitar neck was a slithering snake. He seemingly remembers every incarnation and every member of his band, and he spends a lot of time reminiscing on the qualities of the members who helped shape the band’s sound, such as keyboardist Gregg Rolie and guitarist Neal Schon, who both later went on to form Journey. Santana also acknowledges he wasn’t the easiest person to be around when it came to musical matters, and while he had his share of squabbles with his band members, he consistently avoids making his issues with other musicians personal, which doesn’t exactly stoke rock ’n’ roll drama, but it’s commendable.

He speaks often of the influence of his musical heroes (or, as he calls it, his “Who’s your daddy?” list), many of which were his contemporaries. If his hit album Supernatural is any indication, Santana gets high on collaborating and playing with other musicians. It’s been his MO from the start, and it allowed him to establish bonds with many of his heroes. Santana was quite close with John Lee Hooker, and Santana claims to have helped resurrect the bluesman’s career with their 1989 collaboration “The Healer.” And while he only played with trumpeter Miles Davis on one occasion, Santana had a friendly but cautious relationship with the jazz legend, who gets a lot of attention in the book. Santana hilariously describes a time where he and Davis went out for black bean soup, only for Davis to get into an altercation with a burly waiter about a bread basket. (Anyone who knows Davis knows that he was nothing short of contentious.) “This is the part that was like Alien vs. Predator,” writes Santana. “Miles had some really long fingernails, so he put his beautiful black hand around the guy’s arm really slowly, looked up at him, and in a really creepy way said, ‘I’ll scratch you.’”

Yet, the most intriguing aspect of The Universal Tone is how accessible Santana seems. While he appears cosmic and ethereal, he’s surprisingly down-to-earth and funny. The book is intimate, casual and written as if he’s talking directly to the reader. So much so, that by the time you put the book down, you might feel sad to learn that Carlos Santana is not your real-life friend. But like a good friend, he’ll leave a lasting impression on you, and he might inspire you to seek your own way of accessing The Universal Tone.

Click here for your free subscription to Las Vegas Magazine’s digital edition. Keep up with everything happening in Las Vegas, including reopening information. You’ll also receive the “Lost Issue” of Las Vegas Magazine, published right before the shutdown.