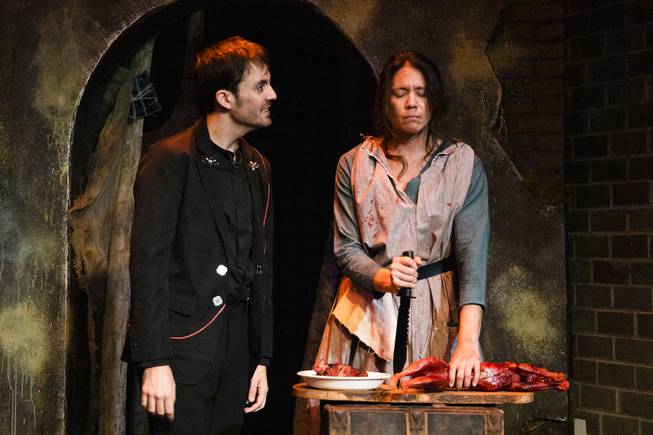 A sleepy Jacobean town called Edmonton will dominate the Vegas Theatre Company stage starting Friday — and the Devil himself will walk its streets.

In “Witch,” the first show to take centerstage at the theater since the start of the pandemic, the Devil, named Scratch, sneaks around granting wishes in exchange for souls. The only one to refuse his offer is the town’s outcast, Elizabeth Sawyer, dubbed the local witch for her solitude and independence.

“Witch” is a 2019 play by Jen Silverman and will premiere this weekend at the company’s venue in Arts Square. Silverman adapts the 1621 play “The Witch of Edmonton,” written by William Rowley, Thomas Dekker and John Ford, by infusing modern-day vernacular — the characters use “like” freely — into the dated period.

The production runs Fridays, Saturdays and Sundays through Nov. 7. Tickets range from $25–33. Proof of vaccination against COVID-19 or a negative COVID-19 test 72 hours prior to the show’s commencement is required.

“We understand that this issue has become an incredibly polarized, and political, position for some Americans,” the company said in an email to viewers before Wednesday’s preview show. “VTC did not come to this decision from that position — we are only concerned with you, our patrons’, health.”

At the preview, friends and frequent theater-goers Ray Smith and Dan O’Neill said they appreciated the reprised availability of live shows. They expressed dissatisfaction with virtual performances — something many theaters elected to do while stage lights were low — because they did not provide the exact level of connection that in-person performances do.

“You could obviously tell someone put a lot of effort into the production,” O’Neill said. “To me, there’s an immediacy about theater that you don’t have in movies.”

The 80-seat theater’s confined space situates actors like Katrina Currow, who plays Elizabeth, close to audience members. She brandishes a long knife, chin held high as the Devil played by Nick Huff, pitches and lays plain the delights he offers. Elizabeth’s denial is playful and physical, aspects that Currow said she latched onto when preparing for the role.

“There’s a point where I put on the costume, and I just kind of get my body physically where I feel like it needs to be,” she said. “It’s more of just getting into the physical, I think, for this one.”

“Witch” is the first in-person show for Currow, she said, since the pandemic began. Before this, the Vegas Theatre Company, formerly known as Cockroach Theatre Company, worked virtually during COVID-19 related shutdowns. But a return to the stage is a relief, artistic director Daz Weller said, as well as a resurgence of what theater is meant to be.

Director Andrew Paul said the turnaround for receiving the script and audition process was approximately two weeks. A month of rehearsals later, Paul said he thinks the actors need an audience to elevate the play.

“It’s a true ensemble play for six actors, and it’s a tour de force for the six actors,” he said. “It’s just a really interesting play.”

As artistic director, Weller selected the play for production at the company. Though the play was written before the pandemic, Weller said he thinks audiences will be able to eye overlapping themes.

“I think it really kind of speaks to the sense of the way that we’ve all been going through this struggle between hope and despair,” he said. “It also kind of raises the question of, ‘What do we want to go back to? Do the structures that we’ve put in place actually support us moving forward?’”