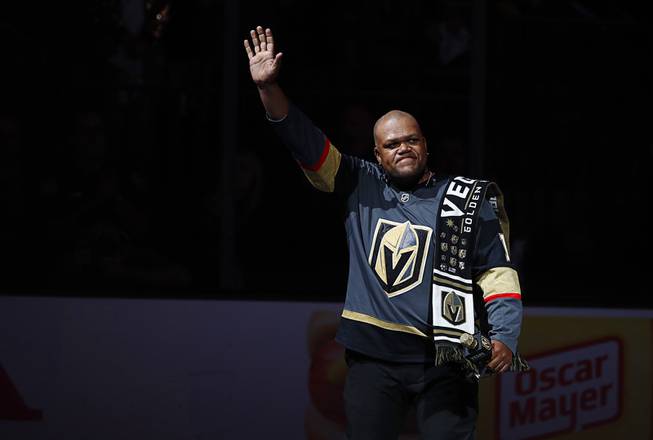 Carnell Johnson waves after performing the Canadian and American national anthems before Game 4 of the NHL hockey playoffs Western Conference finals at T-Mobile Arena Friday, May 18, 2018.

Las Vegas native Carnell Johnson has held two of the most uniquely Vegas jobs imaginable. Before he became recognized for his powerful rendition of the national anthem performed before Vegas Golden Knights games at T-Mobile Arena, he entertained at the Venetian as a singing gondolier.

“It’s a much different type of Vegas job,” Johnson says on the latest episode of the Sun on the Strip podcast. “As a singing gondolier, you’re there for five or six hours a day, talking, singing, entertaining. It’s a lot of physical activity.”

Nicknamed “Golden Pipes” after the hockey gig took off, Johnson, a classically trained vocalist who earned a degree in music education so he could teach choir, says both of those very Vegas jobs helped mold him into the performer he is today, but it was singing the anthem in front of those huge Fortress crowds that catapulted his career. “It really thrust me into the entertainment industry in Vegas. … It’s been a wild ride for the last couple of years.”

Live entertainment is still very restricted these days, but Johnson has been able to get back to work by performing in an acoustic duo act, Coverlane, with a friend and another talented singer, Lynnae Meyers. They currently have a standing Wednesday night gig at Wolfgang Puck Players Locker at Downtown Summerlin and are hoping to expand their schedule as conditions loosen up.

“I love doing that kind of stuff, especially just sitting there playing guitar and enjoying the evening. It’s been exactly what the people want and need right now, just some form of live music they can enjoy [while] socially distancing at the same time,” he says. “We’re out on the patio, so there’s not a big crowd or anything.”