A number of Las Vegans head to Disneyland for Nevada Day. It makes sense at an anecdotal level: Your kids are out of school while SoCal kids aren’t, and you think, “Boy howdy, we’ll have the whole park to ourselves.” (Your giddy exclamation may vary.) Unfortunately, that hasn’t been true in years. This year’s observed Nevada Day, October 25, is in the midst of a historical busy time for the Disneyland resort; Disneyland and Disney California Adventure are usually flooded with SoCal annual passholders re-entering the parks after enduring a long summer of blackout dates, and the resort’s Halloween promotions are in full swing. Plus—and this is an important thing to understand—Disneyland doesn’t have off-days anymore. It’s all bodies, all the time.

Except … that may not be entirely true, either. This past summer, Disneyland saw historically low crowds—partly the result of crowd-control efforts Disney made to prevent its new Star Wars-themed expansion, Galaxy’s Edge, from being swamped with fanboys. (Disney strongly telegraphed that the parks would be packed; their efforts more or less scared the crowds completely away.) But there’s another factor at play here, and it’s such a head-slapper that I’m kind of amazed how little play it’s gotten even in the SoCal papers: With the addition of Galaxy’s Edge, Disneyland just grew by 14 acres. And it spent a year preparing for its debut—widening park walkways, adding dining and seating areas and opening up an entirely new parking garage. One of the reasons Disney added Galaxy’s Edge to Disneyland and not Disney California Adventure was to address severe congestion problems in the former park. It spent millions to make Disneyland feel less crowded; is it all that shocking that it worked?

Anyway. Last month I checked out Disney’s biennial fan convention, D23, just across the street from Disneyland at the Anaheim Convention Center. I squeezed in a visit to the parks, because ya gotta. And I can tell you that the Disneyland resort, while still premium-priced—$129-$149 for a one-day park-hopper ticket, depending on the crowds—is offering some decent bang for the buck these days, and it’s only getting bigger and better. (Probably more expensive, too, but we’ll come back to that next year.) Here’s some of what was announced for Disneyland and Disney California Adventure at D23, and a few pieces of advice I picked up from my quickie trip to the parks.

Galaxy’s Edge. Disneyland’s immersive Star Wars land opened this summer with only one of its two attractions—a flight simulator/shoot-‘em-up game themed to the Millennium Falcon. The land’s bigger attraction—a massive dark ride called Rise of the Resistance—doesn’t open until January 2020, a delay reportedly owed to the attraction’s sheer ambition and technical complexity. (Anecdotal reports claim the entire attraction experience exceeds 20 minutes in length and utilizes three completely different ride systems; if true, it’s little wonder Disney is allowing for a longer test-and-adjust period.) A brief video presentation at D23 revealed some of the attraction’s sets, and they’re of a scale you’ve ever seen in a Disney park before. Imagine the giant “Temple of the Forbidden Eye” set from the park’s Indiana Jones attraction, only quadrupled in size. There will be legions of First Order Stormtroopers, full-size Empire Strikes Back Walkers … Even glimpsed in brief, these set pieces look spectacular.

Disneyland’s Rise of the Resistance attraction opens in January.

The rest or Galaxy’s Edge is open now, however, and if you like Star Wars even a tiny bit, you’ll be floored by what Disney’s Imagineers have pulled off. It feels like a Star Wars movie. The visual details are abundant and fun to dig through; the sound design is absolute perfection—and if you can stand at the foot of a full-sized Millennium Falcon and not exclaim something unbecoming to a Disney park, you’re a better Jedi than I am.

The Millennium Falcon: Smuggler’s Run attraction is good fun, though I admit that I enjoyed the queue—an intensely detailed assortment of set pieces that culminates in an encounter with one of Disney’s most advanced Audio-Animatronics figures, and a too-brief visit to the Falcon’s iconic crew quarters—more than I enjoyed the simulator ride itself. A successful trip on the latter is dependent on video game-style button-mashing, which might excite 12-year-olds but leaves me feeling exhausted. I don’t want to fly the Falcon; I wanna sit in the cockpit and make “we’re doomed” comments while Rey and Chewie fly it. Still, that drawback is more than offset by the other goodies—aural, visual, tactile, olfactory and gustatory—that Galaxy’s Edge offers. They’ve got a cantina with a robot DJ, for crying out loud.

Avengers Campus. Marvel may have lost the rights to use Spider-Man in its larger Marvel Cinematic Universe, but that’s not getting in the way of the addition of a Spider-Man attraction to Disney California Adventure—the first phase of an Avengers-themed land that replaces the kiddie-centric A Bug’s Land area. Riders will fire “webs” at “Spider-Bots” in a 3D shoot-‘em-up, the exact technology of which is still under wraps. The ride will reportedly debut next summer, along with the rest of the Marvel-themed land’s first phase. 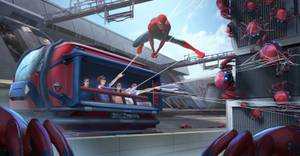 An artist rendering of the Spider-Man ride opening in 2020 at Disney California Adventure.

With a look similar to that of a Silicon Valley tech campus—all repurposed warehouses, bits of extruding hardware and a landing pad—Avengers Campus will also feature an Ant Man-themed restaurant and microbrewery, a character meet-and-greet area inspired by Doctor Strange, a redesigned entry area for the existing Guardians of the Galaxy: Mission Breakout drop ride, and a few years from now, a blockbuster Avengers ride that’s so early in the planning process that Disney Imagineer Scot Drake had virtually no details to share at D23, save for it being “a Quinjet ride to Wakanda” with a huge battle scene.

(Illustrations of the ride in action suggest that riders will be suspended over the sets in flying chairs—which could mean a repeat use of the Soarin’ technology—already repurposed once, for Disney World’s Avatar: Flights of Passage attraction—or possibly the Kuka RoboCoaster G2 ride system that Universal employed for its stunning Harry Potter and the Forbidden Journey ride. Or it could be something else entirely. Disney has broken the mold before, and it still has a while yet to think about how to pull this off.)

Mickey & Minnie’s Runaway Railway. This ride, which will open in Disneyland’s Toontown several years from now, is kind of a secret everyone already knew. We know, for example, that it will make its debut early next year at Walt Disney World in Florida; that it’s based on the charming new Mickey Mouse shorts that Paul Rudish is producing for the Disney Channel; and that it features a trackless ride system and constantly-transforming show sets. All of this was announced at the previous D23 in 2017, and it was scarcely a month after that expo that rumors began to circulate that M&MRR was coming to Disneyland, too. Finally, at this year’s D23, Disney Parks chairman Bob Chapek confirmed the rumor as casually, as if it had been out there all along.

Here’s a fun fact. After M&MRR opens—someday!—Disneyland will have some 42 attractions (not counting meet-and-greets, stage shows, shooting galleries, Toontown’s playground-like diversions and the like). For sheer number of attractions, no other Disney park comes close. The number of attractions at Walt Disney World’s Magic Kingdom is in the low 30s, while Disney California Adventure attractions number barely 20.

Finally: my tips. There’s still more theme parks news from D23, most of it centered around the Florida property. (EPCOT, my second-favorite Disney park, is getting a top-to-bottom redo and I am here for it.) But there are still more changes rumored for the Disneyland resort, including a major revamp for Tomorrowland, that could be announced once those Marvel attractions make their debut. Or at D23 2021, which seems further away than it actually is.

In the meantime, I have a few words of advice for your Nevada Day assault, the first of which you probably won’t like: Don’t visit on Nevada Day. As far as Disney’s concerned, that’s a peak attendance day, worthy of their $149 peak price. If you can schedule your trip within the Monday-Thursday window, the cost of a single-day park hopper pass drops $20. And I don’t know if you have a favorite hotel in the area, but I really like the Hotel Indigo. It’s got a cool boutique appeal, has no resort, parking or internet fees, and is nice and quiet in the mornings.

As for Galaxy’s Edge: The Star Wars-themed area is appropriately placed behind Fantasyland and Frontierland, and it has no directional signage explicitly revealing its location. If I were you, I’d head straight through Sleeping Beauty Castle, make for the Big Thunder Trail at Fantasyland’s northwest corner and hang your first right. Try to get reservations for Oga’s Cantina as soon as you can, because it books fast—and if you want to exceed that venue’s two-drink, 45-minute restricted window, ask others in you party to make reservations for the same day. And when you pilot the Millennium Falcon, ask for the right-side pilot seat, because that’s the one with the lightspeed lever. I could mash that particular button all day long.