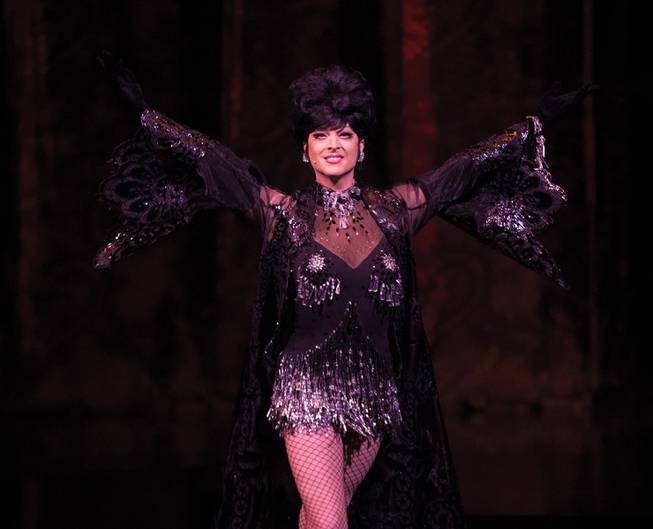 “Zumanity” star Edie will host three virtual and live Drive-In Drag shows on May 30 and 31.

The world’s first drive-in drag show is clearly a fabulous idea in Las Vegas right now. So fabulous, in fact, that the first two shows set for Saturday at 7 and 10 p.m. quickly sold out, necessitating a third show on Sunday at 7 p.m. Tickets are $120 per vehicle while virtual tickets are $25 and both options are on sale now at driveindragshow.com, with proceeds going to benefit Golden Rainbow and The Actors Fund.

“We’ve wanted to do something together for a long time and [combine] that VR world and the performance world, but I was doing 10 shows a week [with “Zumanity”] and it was hard to create a perfect concept,” Kenney says. “This came together very quickly. He calls me and says, ‘I have an idea. What about a drive-in?’ And I said, ‘A drag show?’ He had the spark and we all just jumped in and started collaborating very quickly.”

Kenney brought his Edie character, aka the Mistress of Sensuality, to the hosting role of “Zumanity” 12 years ago. He also produced his own drag shows last year featuring a plethora of performers and the drive-in benefit shows will build on those productions with a focus on live singing. Expect multiple numbers and plenty of surprises.

“This is new. We don’t know exactly how it’s going to work but we will find out,” he says.

Those in vehicular attendance will be able to watch the live performance and also tune their car stereos to a radio station with the audio feed, in case the temperature calls for rolled-up windows and cranked-up air conditioning.

Half of the proceeds from the three shows will benefit local nonprofit institution Golden Rainbow’s mission to provide housing, education and direct financial assistance to men, women and children living with HIV and AIDS in Southern Nevada. The other half will be dedicated to the organization’s new Golden Rainbow Gives Back enterprise in collaboration with national nonprofit The Actors Fund, directing proceeds to Las Vegas-based performers in need. The Actors Fund teamed with local charity event Mondays Dark last month to raise more than $122,000 for local entertainment industry workers.

Tickets for the live drive-in performances can be upgraded to include candy and popcorn, food from Jessie Rae’s BBQ (which has vegan options), VIP parking with tailgate seating and premium beverage service. Guests must be 18 and over. Social distancing rules and regulations will be enforced for attendees and performers and parking starts 30 minutes prior to each show. For more information, visit driveindragshow.com.