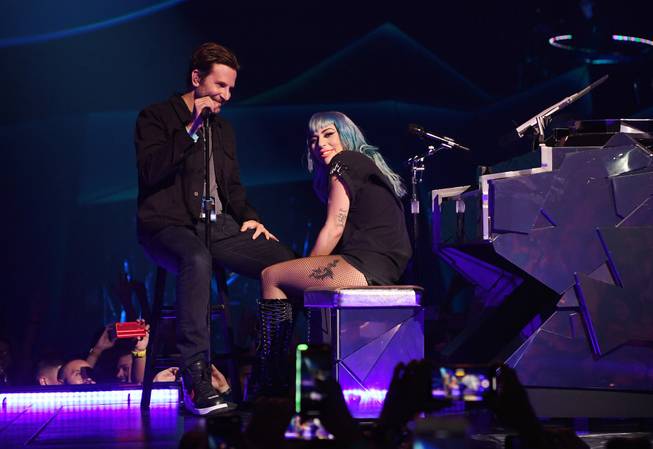 Bradley Cooper and Lady Gaga at Park Theater on January 26.

Current queen of hip-hop Cardi B got a head start on her new Las Vegas residency — announced Thursday for the upcoming KAOS nightclub and dayclub complex at the Palms — when she took the stage at the Joint at the Hard Rock Hotel Saturday night clad in blue lingerie to cap off the 2019 AVN Awards. Cardi, who is also scheduled to perform at the Grammy Awards on February 10, made national headlines with the announcement of her residency and is expected to begin performances in the spring. As reported by Las Vegas Weekly, KAOS’ other stars so far include G-Eazy, Skrillex, Kaskade and Above & Beyond, with more residents to be announced soon. Expect hit-making masked DJ and producer Marshmello to join the KAOS roster next.

Speaking of national headlines, Vegas grabbed them all Sunday morning after Lady Gaga brought Bradley Cooper onstage at the Park Theater Saturday night for their first-ever live performance of “Shallow,” the multiple award-winning and nominated hit from “A Star Is Born.” Cooper, who watched the show from a VIP banquette with Chris Rock, joked about how his character in the film, Jackson Maine, never wore in-ear monitors as Gaga helped him gear up for the performance. He held his own, not sounding as low and gruff as his character’s performance, but hitting his marks and getting more comfortable when Gaga’s piano and powerful vocals arrived. Rumor has it the duo will repeat the performance together at the Academy Awards on February 24, where “Shallow” is up for Best Original Song, “A Star Is Born” is up for Best Picture, Cooper is nominated for Best Actor and Best Adapted Screenplay and Gaga is up for Best Actress.

Human Nature is ready for three more years at the Venetian.

Actor Anthony Mackie (from the new “Miss Bala” and the “Captain America” and “Avengers” movies) was spotted dining at Tao at the Venetian Friday night, sharing satay bass, filet mignon pepper steak and yellowtail jalapeño sashimi with a friend. On Saturday night, Kimberly, Reid and Neil Perry of The Band Perry feasted on bao buns, sushi, Buddha chicken and more at Tao.

Frank Marino will be back onstage — with brunch — for Super Bowl weekend. The iconic Vegas headliner will present two showings of Diva-licious Drag Brunch on February 3 at neighborhood favorite DW Bistro. For more info, visit dwbistro.com.

It was a big weekend for Human Nature. The pristine pop group from Australia signed on for three more years of hit show “Jukebox” in the Sands Showroom at the Venetian, which will make it six years for Andrew Tierney, Mike Tierney, Phil Burton and Toby Allen at their current home on the Strip. And on Saturday, the group was awarded with the Medal of the Order of Australia for their service to the performing arts from the Governor-General of Australia.