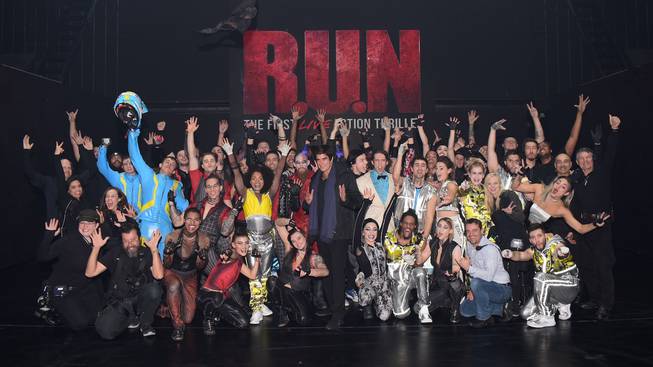 David Copperfield at “R.U.N” at Luxor.

New Luxor resident show “R.U.N” has the David Copperfield stamp of approval. The iconic illusionist stopped in to see Cirque du Soleil’s live-action thriller Thursday night and visited the cast and crew after the show to pose for a photo.

Anderson .Paak and Beck at On the Record.

The Intersect Music Festival brought plenty of music stars and celebrities to the Strip over the weekend, and many of them partied the night away Friday at On the Record at Park MGM. Fest headliners Beck and Anderson .Paak were in the house, along with soul man Leon Bridges, “Hunger Games” actor Josh Hutcherson and “Vanderpump Rules” star Scheana Shay. On Saturday, .Paak dined with a big group of friends at Best Friend, just steps away from the club.

Friday night was one of the biggest nights ever for country music in Las Vegas. Not only did Shania Twain open her new residency at Zappos Theater, but Jason Aldean opened a three-concert run at Park Theater with a powerful performance cheered nonstop by a sold-out crowd of 5,800. He closed Friday’s show with “When She Says Baby,” the song he had started at the Route 91 Harvest Music Festival on October 1, 2017, when shooting began during what would become the deadliest mass shooting in U.S. history. Aldean also played a cover of Tom Petty’s “Won’t Back Down,” just as he did on “Saturday Night Live” six days after the tragedy. He’s set to kick off a huge tour behind his new album “9” in early 2020.

Vegas Golden Knights Alex Tuch, Nate Schmidt and Ryan Reaves took their turn on the holiday ice rink at the Cosmopolitan on Friday night, skating and posing for pictures with fans and mascot Chance the Gila Monster.

MGM Grand resident dance crew Jabbawockeez stole the show during the weekend’s new episode of “Saturday Night Live” hosted by former Strip headliner Jennifer Lopez. The masked artists hit the stage with rapper DaBaby during both of his broadcast performances of songs “Bop” and “Suge.” The Jabbawockeez “Jreamz” show — one of the coolest all-ages offerings on the Strip — plays twice nightly Thursday through Monday at MGM Grand.

The Chainsmokers’ semi-regular Saturday night gig at XS Nightclub was extra special over the weekend as the kings of pop EDM performed and hosted a release party for new album “World War Joy.” They were joined by singer Sabrina Claudio for new track “See The Way,” likely to follow in the footsteps of their many dance chart hits.