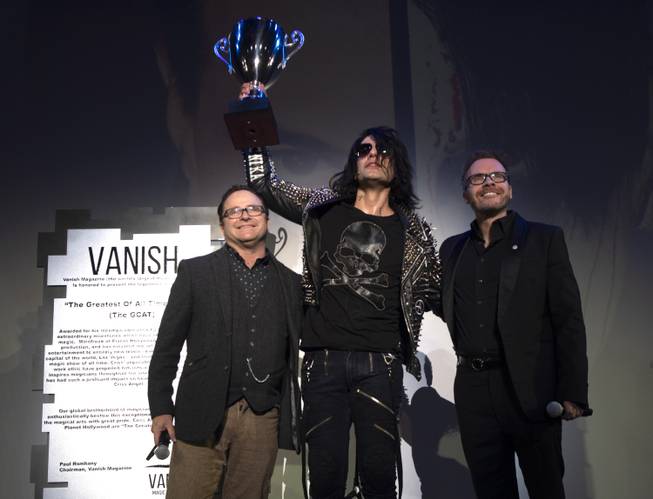 Criss Angel is named the GOAT by Vanish magazine.

One of the Las Vegas Strip’s most talked about headliners won a major artistic award over the weekend. No, not her. Vanish Magic Magazine presented Criss Angel with The Greatest of All Time award onstage in front of a sold-out audience at the conclusion of Angel’s “Mindfreak” show Friday night at Planet Hollywood. “Criss Angel has created a truly historic production and has elevated live entertainment to entirely new levels, even in the entertainment capital of the world,” said Vanish editor Paul Romhany. “Criss’ talent, passion and work ethic have propelled him into a category all his own while continuing to inspire magicians worldwide.”

Chazz Palminteri with the Bronx Wanderers at the Linq.

MGM Cotai in Macau, China, will be featured in the final three episodes of Bravo’s “Top Chef,” which wraps up its 16th season on February 28, March 7 and March 14. This season of the Emmy-winning cooking competition series has been based in Kentucky but the remaining cheftestants will journey overseas and spend time at MGM Cotai’s Skylofts, Grand Ballroom, MGM Theater and chef Graham Elliot’s Coast restaurant, among other destinations.