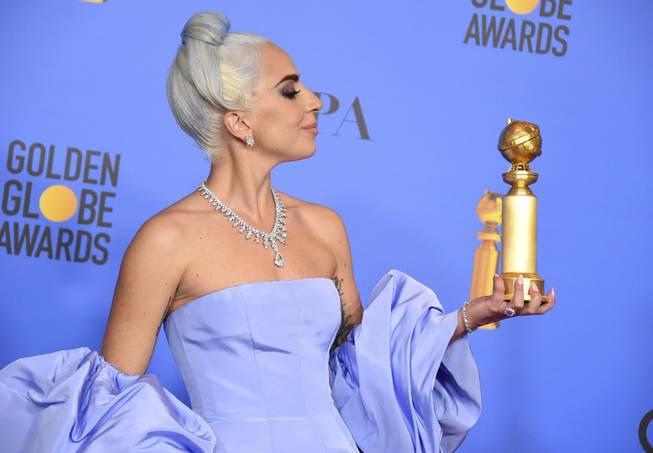 Lady Gaga celebrates at the Golden Globes on January 6.

After the initial shock of Britney Spears’ cancellation of her Las Vegas concert residency on Friday, her would-be colleague at Park Theater Lady Gaga had a big weekend. Gaga won the Golden Globe for Best Original Song Sunday night in L.A. for “Shallow,” the epic tune she wrote with Mark Ronson, Anthony Rossomando and Andrew Wyatt and performed with Bradley Cooper for Cooper’s directorial debut “A Star Is Born.”

Paul Rudd at the Golden Tiki.

“Ant-Man” superstar Paul Rudd partied at off-Strip hot spot the Golden Tiki Friday night along with comedy buddies Ken Marino, Keri Kenney, A.D. Miles and “Brooklyn Nine-Nine” star Joe LoTruglio. The gathering was a belated birthday party for Marino, who wrote the screenplays for Rudd’s movies “Wanderlust” and “Role Models,” and the Hollywood hot shots had so much fun that some of them returned to the Golden Tiki on Saturday.

On The Record, the edgy new nightclub that opened just before New Year’s Eve at Park MGM, has already set a standard of surprise acts and mixing live music with DJs. After “Hip Hop Hooray” rap squad Naughty By Nature took the stage for the club’s first weekly industry night party on January 2, Questlove popped in for a DJ set on Friday night while Saturday put Fall Out Boy’s Pete Wentz behind the decks and throwback hip-hop duo Nice & Smooth onstage. Next up is a CES week Instagram party on Wednesday with performances by Wyclef Jean and Postmodern Jukebox singer Haley Reinhart.

John Michael Higgins, the actor and comedian who hosts “America Says” on the Game show Network but might be best known for his hilarious turn as an announcer in the “Pitch Perfect” films, took his family to the Blue Man Group show at Luxor Thursday night. It’s unclear whether he coaxed an unprecedented a capella performance out of the three Blue Men during a post-show meet-and-greet. On Saturday, Dodgers star Alex Verdugo caught the show.

One of the more innovative new production shows to launch in Las Vegas in recent years is on an indefinite hiatus. “A Mob Story” debuted at the Plaza last year full of great dance sets and inside info from former organized crime boss Michael Franzese, but there are no more shows currently scheduled in the downtown casino’s showroom. A statement from the Plaza notes “A Mob Story” was booked as a limited engagement and “we were very pleased with the positive reviews it received and the feedback from guests who enjoyed it. The Plaza remains committed to provided guests top-notch entertainment and would welcome world-class productions, like ‘A Mob Story,’ to our iconic showroom in the future.”