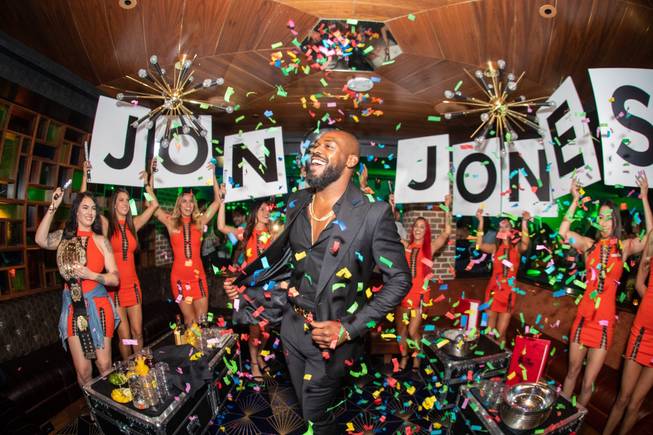 Jon Jones celebrates his victory Saturday night at On the Record.

Instagram and “Real Housewives” personality Larsa Pippen, wife of NBA legend Scottie Pippen, celebrated her birthday Saturday night at Beauty & Essex inside the Cosmopolitan. It was the same night singer Ally Brooke celebrated her birthday at the hip restaurant after performing at the Flamingo Go Pool earlier Saturday. Brooke hit Marquee after dinner to keep the party going. Singer Kehlani was also at Marquee for A Boogie Wit Da Hoodie’s performance after she had dinner with friends at Tao at Venetian.

After he was inducted into the UFC Hall of Fame on Friday during International Fight Week, former light heavyweight champ Rashad Evans celebrated at the Venetian and Palazzo with dinner at Mott 32 and drinks and partying at Electra Cocktail Club and the Dorsey. Also on Friday night, MMA icon Tito Ortiz and friends sipped Grey Goose cocktails and former WWE star Tenille Dashwood partied at On the Record at Park MGM, the club where Jon “Bones” Jones celebrated his UFC 239 victory Saturday night.

Dashwood joined WWE friend Peyton Royce for a night of sexy fun at “Magic Mike Live” at the Hard Rock Hotel on Friday, where Mirage headlining comedian Iliza Shlesinger was also spotted enjoying the show and taking pictures with the cast.

1980s action movie favorite Dolph Lundgren caught “Absinthe” at Caesars Palace Thursday night while in town to co-host the World MMA Awards. At long last, Ivan Drago and the Gazillionaire got together for a photo.