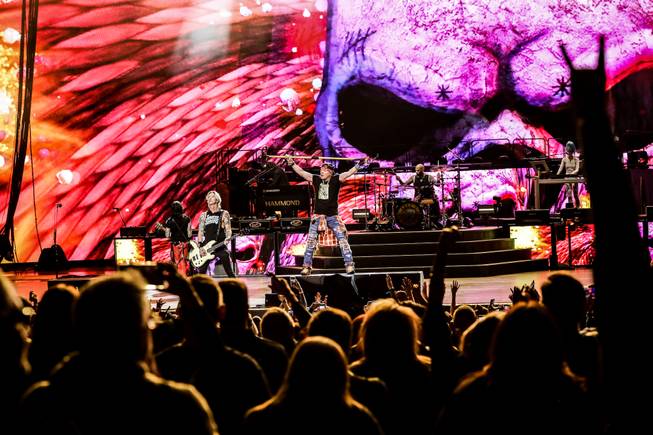 Guns N’ Roses stole the weekend spotlight with back-to-back sold-out concerts at the Colosseum at Caesars Palace to close its massive Not In This Lifetime tour Friday and Saturday. Caesars Entertainment reported the Live Nation-promoted events were the highest-grossing shows the Colosseum has ever seen. Spotted in the audience over the weekend were country music superstar Carrie Underwood, “Aquaman” actor Jason Momoa and Vegas Golden Knights fan favorite Deryk Engelland. Underwood was also sighted Friday having dinner at Sushi Roku at the Forum Shops at Caesars.

Gwen Stefani’s residency show at Planet Hollywood’s Zappos Theater had a different kind of special guest on Friday night. Four service dogs in training from Michael’s Angel Paws popped up at “Just a Girl” and took their handlers backstage for a photo with Gwen before the show. The local nonprofit group has graduated 78 service dog teams and trained more than 200 therapy dogs in the last seven years.

Wayne Newton at the Stirling Club.

Tim Burton has been logging some serious Vegas time since his “Lost Vegas” exhibit opened at the Neon Museum downtown in October. On Thursday night, the iconic filmmaker took in Lady Gaga’s “Enigma” residency show at Park Theater.

In attendance at Marilyn Manson’s Halloween night concert at the Pearl at the Palms: actor Nicolas Cage, who snapped an Instagram selfie with Manson from inside one of the Palms’ Sky Villas. Also in the building Thursday night, rappers Flavor Flav and Flo Rida attended Cardi B’s concert kicking off the opening of the KAOS Dome. Flav and Flo were also spotted Wednesday night watching “Opium” at the Cosmopolitan.

The Stirling Club celebrated Halloween with the Monster Bash and Wayne Newton stopped by after his show at Caesars Palace to sing a few songs for costumed guests at the private club.