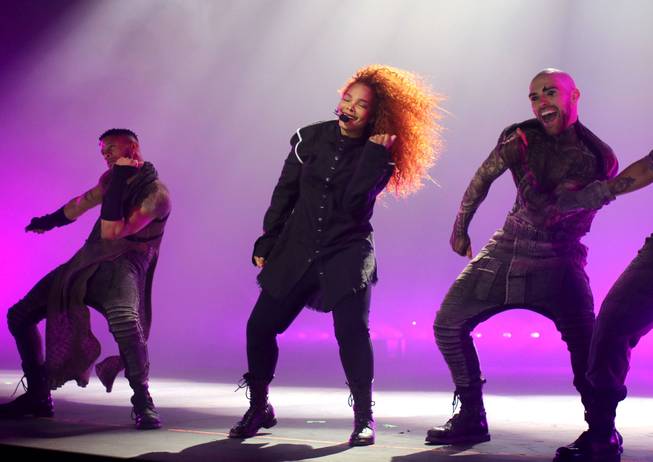 Janet Jackson performs at Park Theater on May 17.

Various genres of electronic dance music dominated the Strip’s nightclubs and dayclubs while EDC raged at the Las Vegas Motor Speedway, but nostalgic pop and R&B owned the weekend at Park MGM as Janet Jackson debuted her “Metamorphosis” residency show at Park Theater Friday night. Cheers erupted before Ms. Jackson even took the stage as the excited audience noticed Queen Latifah and Gabrielle Union taking their seats together. Other celebs in attendance included hoops legend Magic Johnson, rapper and TV host Eve, actresses Yvette Nicole Brown and Hailee Steinfeld and Jackson’s longtime musical collaborator Jimmy Jam, who along with his producing partner Terry Lewis crafted many of the pop icon’s most memorable hits.

“Metamorphosis” is a seemingly effortless crowd-pleaser the likes of which we haven’t seen with most of the Strip’s modern resident headliner. Jackson cruises through multiple medleys of hits culled from blockbuster albums “Control,” “Janet Jackson’s Rhythm Nation 1814,” and “Janet,” leading her traditional army of dancers through equally iconic choreography from classic videos from the golden age of MTV. Twenty-five minutes into the opening show, I couldn’t help but think how she has too many great songs to fit into a 90-minute concert … and then she kept rolling them out. The high-energy dance numbers give way to sultry sections featuring “That’s the Way Love Goes” and “I Get Lonely,” then she pushes it way over the top with an aggressive “Rhythm Nation” set. She closed her first Park Theater show with the infectious tropical beats of last year’s single “Made for Now” and left her fans wanting so much more. Some were lucky to get it at the “Metamorphosis” afterparty across the way at On the Record, where many of those celebs showed up to celebrate with the star. Jackson resumes her residency this month on May 21, 22, 25 and 26.

The legendary Wayne Newton celebrated 60 years of performing in Las Vegas last week with a quick commemoration during his show at Cleopatra’s Barge at Caesars Palace. The singer was presented with a cake and joined by Caesars Entertainment executives onstage for a Champagne toast. Newton performs “Up Close and Personal” at the Barge this week on Monday, Wednesday, Thursday and Saturday.

Hakkasan Nightclub at MGM Grand unveiled a multi-million dollar kinetic light installation on May 16 to kick off EDC week with a performance by resident DJ superstar Tiësto. The 30-foot, 12,000-pound ceiling art installation can create seemingly infinite shapes and colors to advance the sensory experience at the Strip megaclub.