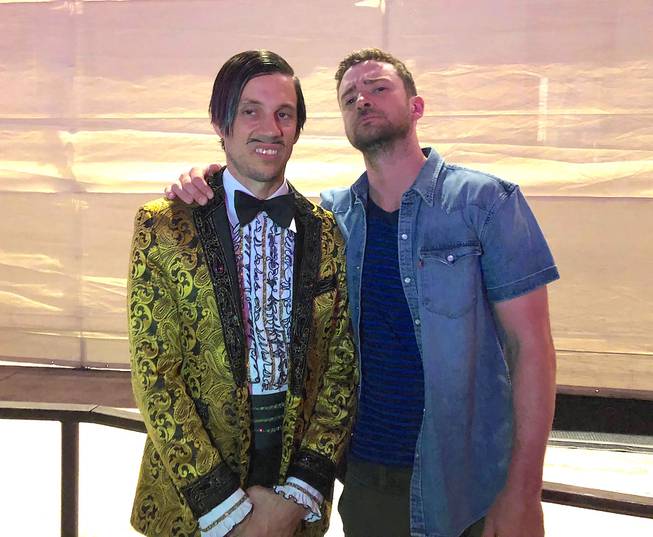 The Gazillionaire with Justin Timberlake.

The one-two music-festival punch of downtown’s Life Is Beautiful and the Strip’s iHeartRadio attracted a galaxy of diverse stars to Las Vegas this past weekend, and not all the action was onstage. TV host Ryan Seacrest took a timeout for lunch at the Cosmopolitan’s Estiatorio Milos Friday while iHeart headliner Justin Timberlake took in “Absinthe” at Caesars Palace Sunday night. The downtown fest was visited by Olympic gold medalist Shaun White Saturday as the snow- and skateboarder hit the Black Tap Craft Burgers & Beer pop-up with girlfriend and Phantogram singer Sarah Barthel; “Jersey Shore” star Ronnie Ortiz-Magro and his girlfriend Jen Harley were spotted there as well. Actor Jeremy Renner partied with Dutch DJ Sam Feldt Saturday night at Marquee Nightclub after Feldt’s performance at LIB, while rapper Travis Scott visited Tao to hype up the club crowd after his second-day LIB set.

Jennifer Lopez’s Saturday night performance of “All I Have” was reported to have set a new record as the single highest grossing night at the Zappos Theater at Planet Hollywood. A group of J.Lo’s Hollywood superfriends were there to see the show and celebrate, including actresses Jessica Alba and Sofia Vergara and pop stars Selena Gomez, Dua Lipa and Becky G. Of course, boyfriend Alex Rodriguez was there too. “All I Have” concludes its run on the Strip this weekend with Lopez’s last shows on September 28 and 29. 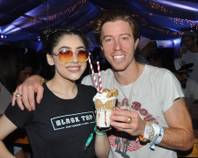 Shaun White takes a milkshake break at Life Is Beautiful.

Kicking off the music-packed weekend on Thursday was rapper Iggy Azalea, who performed a private concert at the Sayers Club at SLS Las Vegas. The exclusive VIP show was for listeners of Los Angeles’ iconic Power 106 FM who had won a trip to Vegas to see Azalea perform all her hits as well as new songs from her “Survive the Summer” EP.

“Magic Mike Live” is expanding beyond its Las Vegas home at the Hard Rock Hotel with a new show in London and the recently selected cast of “Magic Mike Live London” paid Vegas a visit to see how it’s done. The across-the-pond crew hit the Hard Rock Friday night to meet with the Vegas cast after the show for photos and to share sizzling stage tips.

A group of local artists and hospitality workers who are also survivors of the Route 91 shooting on Oct. 1 have created a new country music festival experience and are planning to present its first concert on Oct. 27 at the Henderson Pavilion. Its name is Country58, in honor of the victims lost, and a portion of the proceeds from the event will go to the National Compassion Fund and the Children of the 58 Foundation. Among the scheduled performers are the Rhyolite Sound, Sam Riddle, Justin Carder and Alyssa Oeder and tickets start at $35. For more information, visit country58.com.

Imagine Dragons, the hometown rock heroes who also performed at iHeartRadio on Saturday, recently took over Caesars Palace for the band’s fifth annual Tyler Robinson Foundation Rise Up Gala, a charitable event battling pediatric cancer. Now the Grammy-winning band and frontman Dan Reynolds have been announced as the Ally of the Year honoree at the LGBTQ Community Center of Southern Nevada’s 25th anniversary honorarium on Oct. 6 at the Red Rock Resort. Reynolds, a Vegas native, founded the LoveLoud Festival in 2017 in support of LGBTQ youth. Other honorees at the event include Silver Anniversary Founders Award Recipients Tom Kovach and Jon Sparer, Visibility Award winner Jake Ralston and Corporation of the Year Station Casinos. For more information, visit thecenterlv.org.