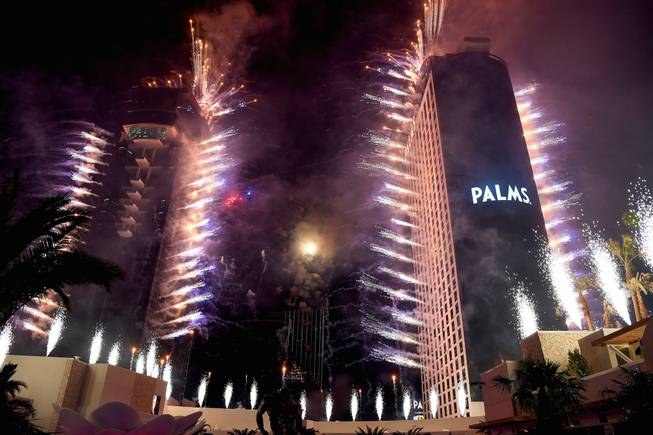 The Palms celebrated the grand opening of KAOS Nightclub with fireworks by Grucci.

Cardi B took the stage at KAOS early Sunday morning.

Now that was a Vegas weekend. There was so much going on that the annual Academy of Country Music Awards — held Sunday night at MGM Grand Garden Arena and hosted by Colosseum resident headliner Reba McEntire — was almost forgotten. But the 54th edition of country music’s biggest night was stacked with big moments, including captivating performances from George Strait, Carrie Underwood, Thomas Rhett, Ashley McBryde, Jason Aldean, Entertainer of the Year award-winner Keith Urban and many more. Big winners Sunday night were Dan & Shay, who took home three awards, and Kacey Musgraves, who won for album and female artist of the year.

The other massive opening of the weekend happened Saturday night at Park Theater, where legendary rockers Aerosmith kicked off their “Deuces Are Wild” residency in uncompromising fashion. Certainly more of a career retrospective than the traditional, made-for-Vegas greatest hits collection, the show opens with a 35-minute film tracing the band’s wild history through archival photos, video footage and interviews before the quintet takes the stage and begins barreling through its 1970s songs like “Train Kept A-Rollin,” “Mama Kin” and “Back in the Saddle.” Bigger hits like “Toys in the Attic,” “Dream On” and “Walk This Way” come later in the show, with Steven Tyler and Joe Perry sauntering out over the crowd in the grand finale. Aerosmith continues at Park MGM tonight and April 11, 13, 16, 18, 21, 23 and 26.

Actor Asher Angel, who plays the teenage alter ego of the titular hero in new comic-book blockbuster “Shazam,” celebrated the movie’s opening weekend by dining with his family at Tao at the Venetian Saturday night. He’s just 16, so no post-meal partying at Tao Nightclub for Angel.

Following an incredible week-long run filming “Jimmy Kimmel Live!” at the Zappos Theater at Planet Hollywood, Caesars Entertainment announced Jimmy Kimmel’s Comedy Club at the Linq Promenade will open on May 2. We already knew the two-level, 8,000-square-foot venue was on its way to the Strip and now we know when the laughs will begin.

Get ready to catch Criss Angel on the small screen. Variety reports that the world famous magician will guest star in an NBC pilot for new comedy series “Like Magic,” which follows an “optimistic young woman (Jee Young Han) pursuing her dream to be a headlining magician in the eccentric and ego-driven world of the Magic Palace.” In addition to continuing his “Mindfreak” show at Planet Hollywood, Angel is also gearing up for a national tour starting May 28 at Sands Bethlehem in Pennsylvania.

The Red Rocker and the Mayor of Flavortown have joined forces. Sammy Hagar and Guy Fieri met in Las Vegas last week to launch their new tequila, Santo Fino Blanco. The longtime friends — both restaurateurs in addition to their respective rock star and TV star labels — announced the new booze Thursday at Southern Glazer’s Wine & Spirits headquarters and it will be available everywhere next month.