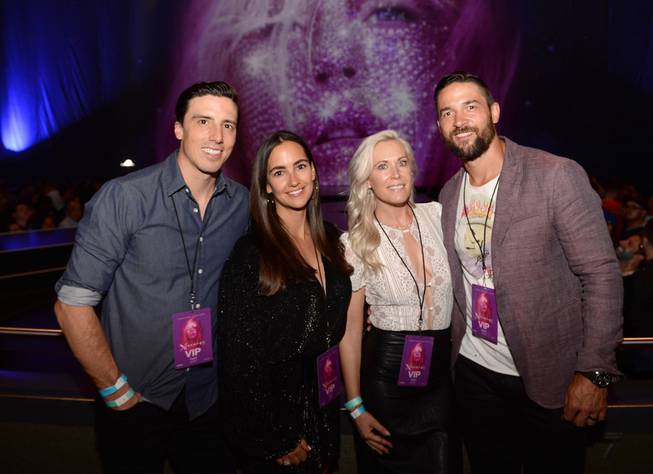 Marc-Andre and Veronique Fleury with Melissa and Deryk Engelland at Christina Aguilera’s show at Planet Hollywood.

It wasn’t really a surprise but it was still sensational. We predicted last week that Lady Gaga would pop in for some musical fun during her “Jazz & Piano” bandleader Brian Newman’s late-night shows at the Nomad Restaurant and that’s exactly what happened Sunday night at Park MGM. After both artists performed during Gaga’s residency at Park Theater, the superstar checked in at NoMad just before midnight and sang six songs with Newman and his band for an audience of less than 200 people. “Brian Newman After Dark” continues at 11 p.m. June 6-9 and 12-15 while Gaga has “Enigma” shows June 6, 8, 12 and 14 and “Jazz & Piano” gigs June 9 and 15 at Park Theater.

Grammy Award-winning dance music duo the Chainsmokers took a break from their Wynn Nightlife residency to visit the Fremont Street Experience in downtown Las Vegas to celebrate the premiere of their new Viva Vision light and sound show Friday night. Fans gathered around the Third Street Stage to catch a glimpse of the DJs and producers and catch the six-minute montage of their hits set to the dazzling imagery of the FSE canopy, which continues to undergo a massive $32 million renovation that should be finished in time for New Year’s Eve.

Comedian Bert Kreischer, in town to take the stage for the Aces of Comedy series at the Mirage, partied at JEMAA: The Nomad Pool Party at Park MGM on Saturday, taking in the sights and sounds at one of the Strip’s hottest summer spots.

More funny stuff: After his sold-out performance at Encore Theater Saturday night, comedian and longtime local fixture Jo Koy hit XS Nightclub to celebrate his 48th birthday with friends and family. Kreischer stopped in to party at the Encore megaclub as well.

A unique bit of just-announced Strip entertainment news: Kesha will perform a free concert for the runners in this year’s Humana Rock ‘n’ Roll Las Vegas Marathon on November 16. She’s the first female headliner for the event, which has previously included Macklemore, Snoop Dogg, the Goo Goo Dolls and Kid Rock as the kickoff performer. “Singing for the runners of the Rock ‘n’ Roll Las Vegas race will be a unique experience,” Kesha said in a statement. “Runners have an inherent energy and strength that reveals amazing self-empowerment, focus and determination to get through the toughest moments, which is something I can relate to. I can’t wait to bring my own wild, fun and hopefully encouraging running-conducive energy for everyone to enjoy for the big race.”