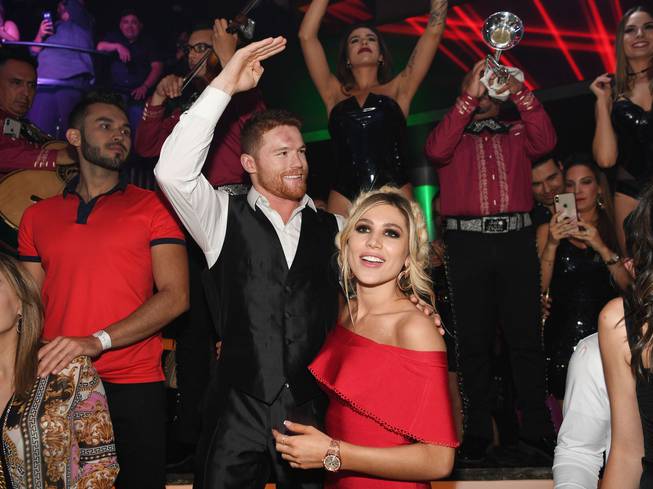 Canelo Alvarez celebrates another victory at KAOS on May 4. 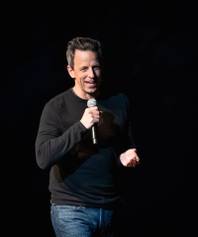 I spent my Saturday night laughing thanks to Seth Meyers, who made his debut at Wynn’s Encore Theater. The “Late Night with Seth Meyers” host and “Saturday Night Live” alum tickled the crowd with stories about his family and a particularly entertaining closing bit telling jokes from his wife’s perspective. We also got a great opener in the edgy and self-deprecating Neil Brennan, best known as a writer and for co-creating “Chappelle’s show” but an incredible stand-up performer as well. With shows like this one and an upcoming slate that includes Jim Gaffigan, Sebastian Maniscalco, Jo Koy, Ali Wong and John Cleese, Encore Theater is suddenly one of the top comedy rooms on the Strip.

With so many stars and celebs hitting the Strip for the Billboard Music Awards Wednesday night at MGM Grand Garden Arena, the Vegas weekend kicked into high gear two days early. You already know about the surprise Vegas wedding of Joe Jonas and Sophie Turner after the show, thanks to some viral social media video work by Wynn Nightlife resident DJ Diplo. Other superstar sightings: Mariah Carey celebrated her Icon Award in Tao’s private dining room with boyfriend Bryan Tanaka and friends and got a visit from Jennifer Hudson, who was dining separately at the Venetian restaurant; Madonna took over the Pearl Lounge at Beauty & Essex at the Cosmopolitan after performing new track “Medellin” on the awards show; and Drake dined at Tao with friends Thursday night, sticking around after the Billboards before his Saturday night residency performance at XS Nightclub. 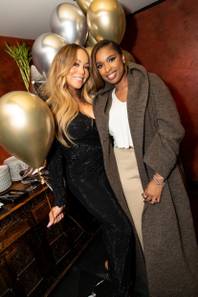 Nobody started the weekend earlier or partied harder than Rob Gronkowski, who hit Vegas to celebrate his retirement from the New England Patriots. Gronk kicked things off at Park MGM’s On the Record Wednesday with girlfriend Camille Kostek and family and friends, snagging of the upper dance floor tables and karaoke rooms where Tito’s and Don Julio 1942 were sipped and “Sweet Child O’ Mine” and “Baby’s Got Back” were sung. The three-time Super Bowl champed moved the party to KAOS Dayclub at the Palms Friday and Saturday, catching performances by Zion & Lennox and Marshmello, and doubled back to KAOS Saturday night and secured a cabana overlooking the pool. On Sunday, he wrapped up a wild weekend at JEMAA The Nomad Pool party at Park MGM and was presented with a retirement cake and Champagne.

Usher was back in town for the big fight weekend, partying Saturday at JEMAA with boxer buddy Joe Fournier while another friend, Questlove, commanded the party from the DJ booth. Usher also hit KAOS on Saturday with rapper YG.

Flo Rida set it off at the Flamingo Go Pool on Saturday, spraying the crowd with Champagne and bringing Flavor Flav onstage to ignite the party. Also in attendance were Vegas-born DJ 3LAU and professional wrestler Mojo Rawley.

Criss Angel magically made some extra time appear in his busy schedule and visited Caesars Palace last week to check out “Absinthe.” He even snapped a pic with the Gazillionaire and the Green Fairy after the late show.