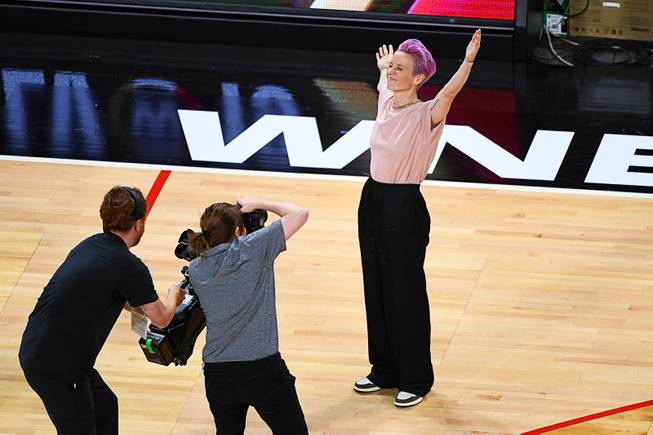 There were some serious Las Vegas Weekly parties to get the weekend started, beginning with Thursday night’s Shake Off at Electra Cocktail Club at Palazzo, where my All The Vegas podcast co-host Mark Shunock and I battled for drink-mixing supremacy. Actually, Electra’s talented bar staff, including mega-mixologist Evan Hosaka, came up with the drink recipes based on our preferences, and while both libations were delicious, my Volcán tequila-anchored sipper won out. The Shake Off returns this Thursday August 1 at 6 p.m. at Electra to benefit Communities in Schools. Check it out. And then, the big bash: XS Nightclub hosted the annual Las Vegas Weekly Best of Vegas party Friday night to celebrate the magazine’s biggest issue of the year and all 133 Best of Vegas winners, many of whom showed up to accept their awards and indulge in cocktails by Long Drink and Grey Goose and treats by Carl’s Donuts. Everyone agreed this year’s tropical-themed soiree was one of the best yet.

Saturday was all about the WNBA All-Star Game at Mandalay Bay Events Center, where Las Vegas Aces stars A’ja Wilson, Liz Cambage and Kayla McBride acted as generous hosts and happily shared the energetic hoops culture at The House with the rest of the league. Even though an injury stopped her from playing, Wilson still greeted the near-sellout crowd before the game while Kristin Chenoweth sang the national anthem and Teyana Taylor performed at halftime. Kobe Bryant and Chris Paul were among the celebs in the crowd and while they received loud ovations when they appeared on the scoreboard screen, it was nothing compared to the deafening roar throughout the events center when soccer hero Megan Rapinoe popped out of her front row seat to throw T-shirts into the crowd.

In town to host the Pop 2000 Tour at the Fremont Street Experience downtown, Lance Bass hit the town Friday night and was spotted at “Magic Mike Live” at the Hard Rock Hotel. He also joined Ryan Cabrera’s birthday party Saturday night at On the Record at Park MGM, where the birthday boy DJ’d for about an hour in the club’s double-decker bus on the patio. Actor Taye Diggs and model Marta Pazzon were also spotted at OTR.

Former Disney star Madison Pettis celebrated her 21st birthday at the Palms over the weekend, staying in the Revolve Suite and dining at Scotch 80 Prime Friday night before hitting brunch at Greene St. Kitchen and taking over KAOS Dayclub with her party crew on Saturday.

Migos rapper Quavo hopped onstage at Marquee Nightclub Saturday night with returning resident Travis Scott to perform their collaborative track “Pick Up The Phone.” NBA star James Harden was also in the mix, hanging in the DJ booth with Chase B and partying with Scott earlier in the day at a Marquee Dayclub cabana.

YouTube superstars Jake Paul and Tana Mongeau have been dating for a few months, which means it was time to fly to Vegas for a whirlwind wedding. The ceremony was held Sunday at the “Graffiti Mansion” property also known as Villa Shangri-La on the west side of town before the party moved to Sugar Factory American Brasserie at the Fashion show mall. Hundreds of friends and fans, including Paul’s social media star brother Logan Paul, flocked to the sweet hot spot where the couple celebrated with two cakes, took photos with fans and danced the night away with artist and influencer guests like Dax, Brandon Amato, Lauren Dascalo, Payton Caci, Austin Hare and others.

The star of “The Drew Carey show,” “Whose Line Is It Anyway?” and “The Price is Right” hit Caesars Palace Sunday night. Drew Carey was spotted enjoying “Absinthe” at center Strip and snapped a photo with the Gazillionaire and the Green Fairy after the late show.