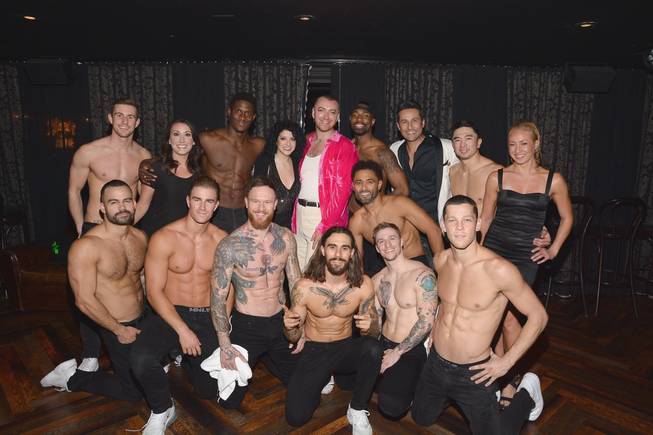 Sam Smith with the cast of “Magic Mike Live” at the Hard Rock Hotel.

I began my weekend in a delicious way with a stop at the Venetian’s annual Haute Cuisine event, held this year at the Palazzo’s Aquatic Club Friday night. The visiting Master Chefs of France each commandeered a poolside booth and showcased a different dish from around the world, each bite paired with a carefully curated wine selection. Our favorite dish was David Werly’s satisfying Greek gyro. After the event, several of the chefs bounced over to the Grand Canal Shoppes to catch the sizzling hot “Atomic Saloon show.” 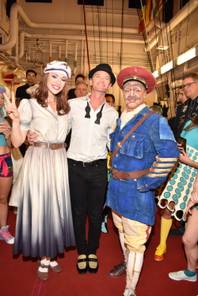 On Friday night, Neil Patrick Harris and husband David Burtka attended a performance of “The Beatles LOVE” at the Mirage. Also in their group: actress Elizabeth Berkley (forever connected to Las Vegas for her starring role in the cult classic “Showgirls”) and husband Greg Lauren. Harris and Burtka also caught “Opium” at the Cosmopolitan on Thursday night, and the actor was even called onstage to assist the cast in a pivotal moment of the uproarious sci-fi comedy variety show.

Grammy Award-winning singer and songwriter Sam Smith, who has two singles burning up the charts and airplay right now with “How Do You Sleep?” and “Dancing With A Stranger,” visited the Hard Rock Hotel to catch “Magic Mike Live” on Saturday night. Smith stuck around to meet the cast and took plenty of photos after the show, which recently announced it will be moving to the Sahara next year. On Sunday night, cast members from the Broadway musical “Wicked” celebrated their final performance at the Smith Center for the Performing Arts with a dose of “Magic Mike.”

R&B artist Miguel and his actress/model wife, Nazanin Mandi, celebrated her birthday with dinner in the private dining room at Beauty & Essex at the Cosmopolitan on Saturday night. Miguel will be back in Las Vegas in November for the Day N Vegas music festival. Also at B&E Saturday: Josh Murray of “The Bachelor,” who shared food and drinks with friends after his party group went to “Absinthe” at Caesars Palace.