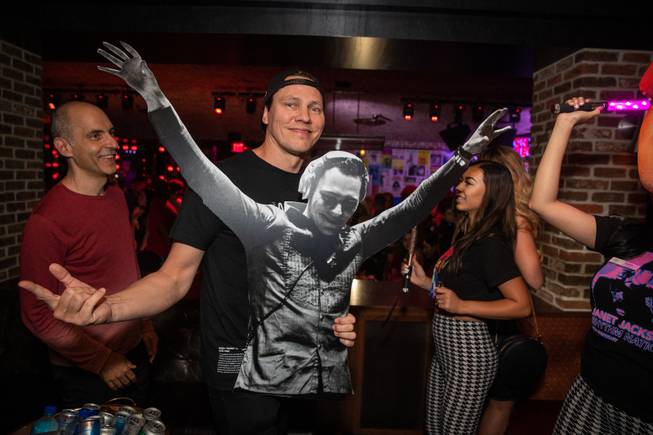 Tiësto celebrates at On the Record.

“Hans Klok: The World’s Fastest Magician” opened at the new Thunderland Showroom at the Excalibur last week and some iconic, Las Vegas magic royalty were among those who couldn’t wait to take in the new show. Siegfried and Roy attended the Wednesday night performance and received a standing ovation during the show when Klok paused to recognize their presence. The three magicians have been friends for years since Klok met the duo as a teenager at a magic convention in Amsterdam.

“The Terry Bradshaw show” premiered at the Atrium Showroom at Luxor Thursday night and local scenesters including Boxing Hall of Fame announcer Al Bernstein and cast members from “Fantasy” and “Thunder From Down Under” joined the famous footballer’s family Tammy Bradshaw, Rachel Bradshaw, Lacey Hester and Noah Hester in supporting the high-energy new show. After the first run, Terry Bradshaw had a surprise reunion backstage with Louisiana Tech teammate Clyde Harrison, who he hadn’t seen in more than 40 years, and at Friday night’s show, Bradshaw’s actor pal Henry Winkler popped in to catch the action.

Superstar DJ and longtime Las Vegas club party-starter Tiësto celebrated his bachelor party at Park MGM’s On the Record Friday night, taking over the intimate venue with friends and enjoying Don Julio 1942 and Fernet-Branca beverages while DJ Mell Starr played “Boom” while the club’s dancers performed some choreographed moves to the Tiësto hit. The group hit one of the club’s karaoke rooms and kept the party going until the wee hours.

Also on Friday night, comedian Martin Lawrence hit the Linq to check out “Mat Franco: Magic Reinvented Nightly.” The actor and funnyman has been working on another installment of the “Bad Boys” action film series.