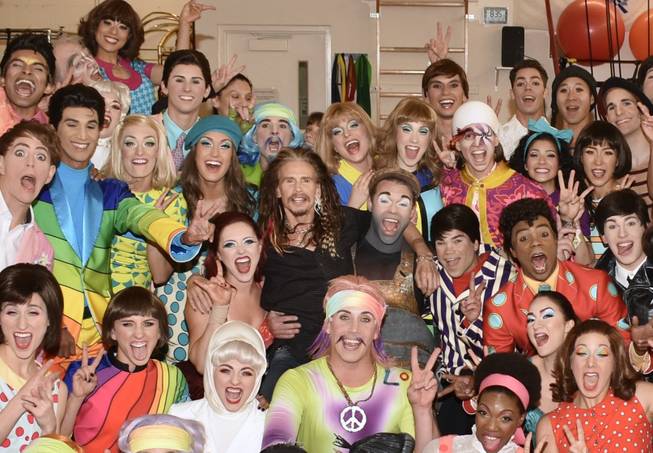 Two Las Vegas headliners converged on one stage for a moment on Friday night. Performing at Zappos Theater at Planet Hollywood, the Backstreet Boys pulled a fan onstage during “Shape of My Heart” and it turned out to be Aimee Preston, girlfriend of Aerosmith frontman Steven Tyler. It wasn’t long before Tyler bounded onstage to present her with a rose and thank the boy band for the serenade. Aerosmith continues the first run of its “Deuces are Wild” residency this week on April 23 and 26 at Park Theater and will return to the Strip in June. The Backstreet Boys will conclude their two-year “Larger Than Life” residency at Zappos Theater this week with three final shows on April 24, 26 and 27.

Tyler was making the Vegas rounds earlier in the week, traveling to the Mirage for an exclusive behind-the-scenes experience at Cirque du Soleil’s beloved production “The Beatles LOVE” Wednesday. The 71-year-old singer was escorted to the show’s backstage audio room where he listened to a few isolated tracks from the 120 Beatles songs used in the show’s iconic soundtrack and also spent some time posing for pics with the cast. And Aerosmith drummer Joey Kramer was also out and about, taking in “Absinthe” at Caesars Palace Saturday night.

With Aerosmith and John Fogerty on the roster, it was another rousing rock weekend on the Strip. On Saturday Fogerty wrapped the first run of his new Encore Theater show “My 50 Year Trip,” inspired by the 50th anniversary of Woodstock, and today announced his return to Wynn for six more shows in November.

Multi-talented singer and entertainer Usher partied at XS Nightclub Friday night, enjoying a set from hitmakers the Chainsmokers and posing for photos with the Wynn Nightlife resident DJ duo.

It’s probably no surprise that the “queen of burlesque” stopped in to see one of the sexiest shows in Las Vegas last week. Dita Von Teese hit the Hard Rock to catch “Magic Mike Live” and strolled backstage for a private meet-and-greet with the cast. On Saturday night, it was “Glee” actor Kevin McHale’s turn to check out “Magic Mike.”