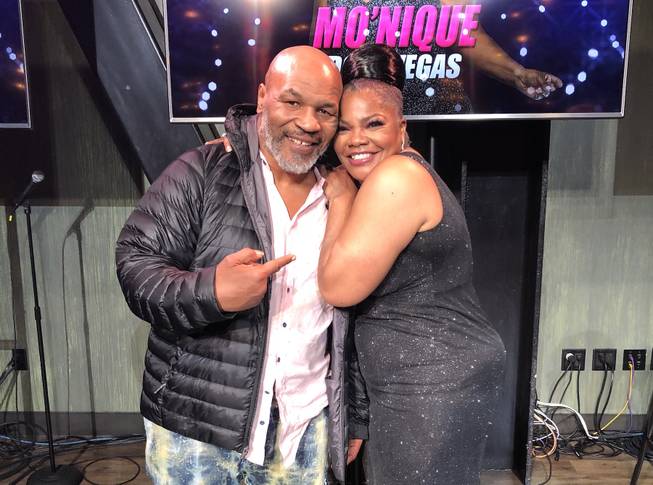 Lots of laughs at SLS with Mike Tyson and Mo’Nique.

Comedian and actress Mo’Nique wrapped up her very first Las Vegas residency over the weekend and a big Vegas name was there to laugh along with the Sayers Club audience Friday night. Mike Tyson and wife Kiki took in the show and congratulated Mo’Nique on the successful run at SLS Las Vegas.

No one takes better advantage of Vegas during a big fight weekend than the fighters themselves. Featherweight Jeremy Stephens dined at Sake Rok at The Park Saturday after his bout at UFC 235 while fellow combatants Nate Diaz and Gilbert Melendez also enjoyed the festive atmosphere and signature sushi rolls at the high-energy Strip spot. Anthony Smith and Cody Stamann did their post-fight partying at Hyde Bellagio at an event hosted by former UFC champ Cody Garbrandt. Kamaru Usman celebrated his victory Saturday at Electra Cocktail Club at the Venetian with teammates Rashad Evans and Luke Rockhold. And Jon “Bones” Jones received a champion’s welcome at On the Record at Park MGM after retaining his light heavyweight title in the main event. Muse frontman Matt Bellamy, members of rock band Walk the Moon and “Big Bang Theory” actor Kunal Nayyar also made the scene at OTR.

“How I Met Your Mother” and “American Pie” star Alyson Hannigan took her nine-year-old daughter Satyanna to see Gwen Stefani’s “Just A Girl” show at Zappos Theater at Planet Hollywood Saturday night, heading backstage before the musical spectacular to get a photo with one of the Strip’s newest resident headliners. Hannigan was in town to film several episodes of CW series “Penn & Teller: Fool Us.”