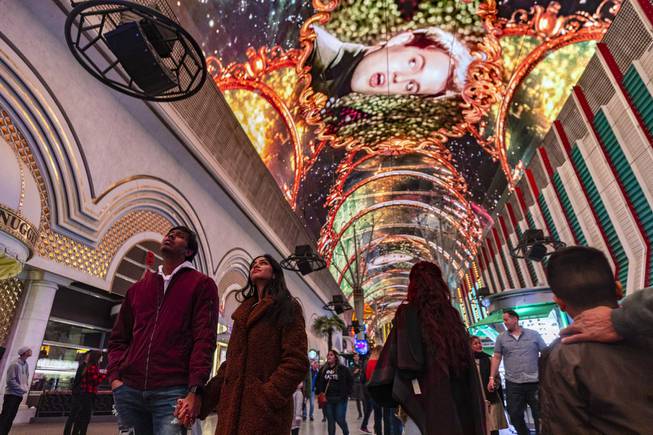 Thousands of winter revelers who just happened to be experiencing the Fremont Street Experience Thursday night were treated to a sneak peek presentation of the incredible, upgraded visuals and sound from the Viva Vision canopy that will be officially unveiled on New Year’s Eve. The $32 million renovation of the world’s largest single video screen is complete and ready for action, combining 49.3 million LEDs with a 600,000-watt sound system and plenty of innovative new content. The five-city-block-long canopy is now seven times brighter and projects with four times the resolution of the previous screen, allowing it to be viewed 24 hours a day.

Fremont Street Experience President and CEO Patrick Hughes, CEO of The D, Golden Gate and Circa resorts Derek Stevens, LVCVA Vice President of Marketing H. Fletch Brunelle and other officials were on-hand for the preview, perched on the Main Street Stage with a dynamic view of the new Viva Vision content, which included a glimpse of “MIXology,” the signature show inspired by the multi-sensory experience known as synesthesia. If it’s been a while since you’ve seen one of the Fremont Street Experience video shows, you’re in for a mind-blowing surprise. 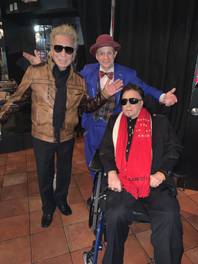 “The redevelopment of the iconic Viva Vision canopy is a major milestone for the Fremont Street Experience and the City of Las Vegas,” said Hughes. “With Fremont Street Experience attracting more than 24 million visitors a year, we’re really looking forward to seeing the positive impact it will have on the entire community while breathing new life into downtown Las Vegas.”

After Saturday night’s “Mindfreak” show, Criss Angel made an onstage presentation of the Magic Wand Award to the Driscolls, a family that has been affected by pediatric cancer, in front of a sold-out audience at the Criss Angel Theater at Planet Hollywood. Angel received the first Magic Wand Award three years ago in recognition of his work with the Make-A-Wish organization and now he presents the award every year to a volunteer who embodies the same giving spirit. Angel gave an emotional speech in honor of the Driscolls and his son Johnny Crisstopher, who is currently undergoing treatment since relapsing with leukemia.