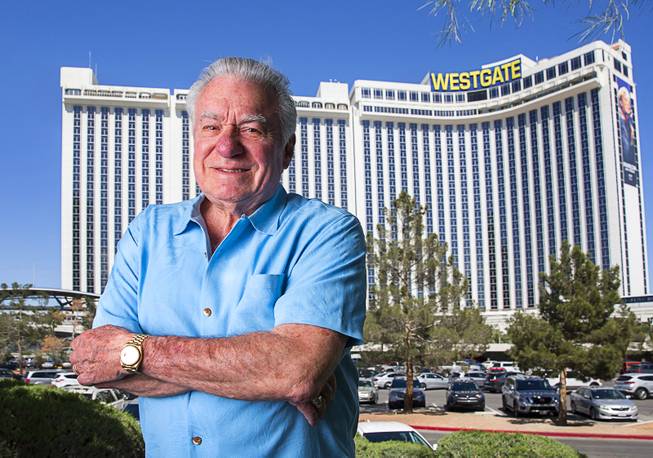 Richard Brian/Special to the Sun

Westgate Las Vegas Resort and Casino owner David Siegel poses outside his property in Las Vegas on Saturday, May 4, 2019.

Westgate Las Vegas has been doing things a little differently since timeshare mogul David Siegel acquired the hotel and casino just east of the Strip in 2014. It’s also reopening in its own way, on its own schedule.

Many resorts in the tourist corridor reopened as soon as possible on June 4 with Las Vegas’ largest gaming companies, MGM Resorts and Caesars Entertainment, staggering their many casino properties. Westgate held off until this week and is now set to resume operations at noon on June 18.

“Our branding is all about legendary Vegas fun and now we really have to focus on making it legendary Vegas safe fun,” said Gordon Prouty, director of public relations. “We’ve been doing a lot of training and talking to our team members to make sure our guests feel as welcome and even more celebrated than they have before.”

Opened in 1969 as the International Hotel by Kirk Kerkorian and most readily recognized as the Las Vegas Hilton for more than 40 years, the property was home to Elvis Presley’s legendary concert residency beginning in 1969. In the modern era, its proximity to the Las Vegas Convention Center has contributed to a well-rounded identity as a Vegas destination for business and entertainment.

Miranda Alam/Special to the Weekly

The SuperBook at the Westgate in Las Vegas on Saturday, Nov. 16, 2019. Miranda Alam/Special to the Weekly

But the lack of convention traffic in Las Vegas as the city starts its recovery from the shutdown was not a major factor in the delayed reopening, Prouty said.

“The main factor was the safety issue, doing what’s in the best interests of our team members and guests. Conventions don’t play a role right now and the earliest we’ll see something is August,” he said.

The next convention on the LVCC calendar is ASD Market Week, a consumer merchandise trade show, set to open August 2.

Like the other casino resorts on Las Vegas Boulevard, Westgate will reopen its restaurants and amenities gradually depending on demand. Fresco Italiano and the Fortuna café will be ready this week, as well as the famous SuperBook, the pool and the fitness center. Other restaurants like the popular Edge Steakhouse will be coming back online soon.

Prouty said the casino is getting creative with signage and communication that welcomes visitors back to Las Vegas and reminds guests to maintain social distancing and stay safe. You might see resident magician Jen Kramer’s image on floor signage touting that “Vegas magic is six feet apart,” or maybe it will be “six blue suede shoes apart” to recall the spirit of the King.

“We’re trying to do things differently,” Prouty said. “We saw some healthcare providers covered with masks and goggles using pictures of their smiling faces to [comfort patients] and we’re doing that with team members. And we’re going to use a lot of different specials to welcome everybody back.”

Another unique program will see Westgate creating sections of table games in the casino where players will be required to wear masks. Other casinos are using plexiglass partitions at some live gaming stations, limiting the number of players at each table or requiring masks for certain games where proximity is an issue. Westgate’s masked gaming options are designed to provide as many casino options as possible.

Property officials also believe they have an entertainment advantage with the Westgate Cabaret, a 350-seat venue which has recently hosted shows by Kramer, comedian George Wallace, musical tribute “Soul of Motown” and female revue “Sexxy.” The venue can be altered by opening two sides of roll-up doors to become more of an open casino lounge.

Resorts are still waiting for guidelines for ticketed entertainment in showrooms and theaters from the Governor’s Office and the Nevada Gaming Control Board, though some shows are selling tickets for early July in anticipation of that approval.

“We are going to be smart about every part of reopening and watching it all closely,” Prouty said. “We’re just looking forward to welcoming everybody back and reminding them they’re the heartbeat of the property, our team members and our guests. It’s important to give customers the same Vegas experience and we’re relying on our team now more than ever and counting on them to make that difference.”