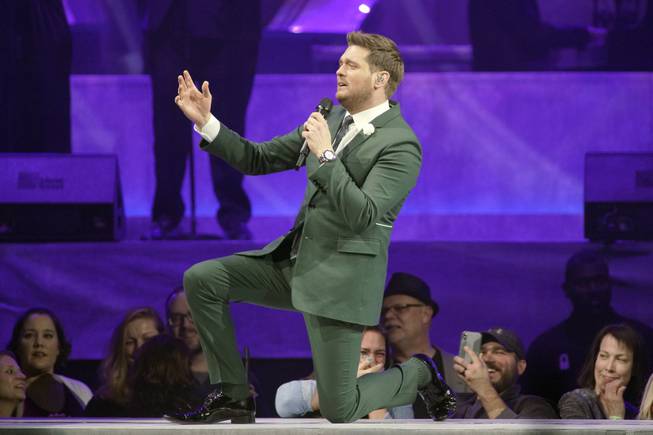 Michael Buble’s tour stop at T-Mobile Arena May 9 is still on the schedule.

The Las Vegas Strip is completely shut down and it’s impossible to predict when the Entertainment Capital of the World will resume operations. But if we look to one of the biggest venues in the valley, T-Mobile Arena — arguably the heart of today’s live entertainment landscape — we can at least see the target.

Michael Bublé on May 9. That’s what we’re hoping for.

It’s also impossible to determine if seeing the Canadian pop singer at T-Mobile in seven weeks is a reasonable goal. Strip casinos started postponing and canceling touring concerts, production shows and everything in between several days before Gov. Steve Sisolak called a 30-day halt to showbiz and all other business on Las Vegas Boulevard on Tuesday.

Even if the monthlong closure isn’t extended, it’s unlikely any major entertainment events will return to regular scheduled programming in mid-April. Cirque du Soleil’s seven strip productions are currently selling tickets for shows on May 11 or 12, with the exception of “Mystére” at Treasure Island, the only Cirque show not located at an MGM Resorts International property. It has a listed re-opening date of May 2.

Cirque CEO Daniel Lamarre said in a statement released Thursday detailing company-wide temporary layoffs as a result of the pandemic that it was “the most difficult day” in the history of the company, but noted that plans are in place for rehiring and returning to the stage when the time is right.

“We are confident that when the day comes when we can reopen our shows, we will be ready to welcome the millions of fans who come to our shows worldwide,” he said.

Other Vegas show institutions and headliners have hopeful dates with tickets currently for sale, including Carrot Top at Luxor on May 18 (along with “Fantasy” May 11 and the new “Terry Bradshaw show” May 13 in the same theater), Penn & Teller at the Rio May 2, Barry Manilow at Westgate May 28 and David Copperfield at MGM Grand May 11.

The next listed bookings at the big three residency rooms on the Strip are the Who at the Colosseum at Caesars Palace on May 5, Pitbull at Zappos Theater at Planet Hollywood on April 22 and Lady Gaga at Park MGM’s Park Theater on May 2.

At Wynn, “Le Reve” is currently slated to reopen May 1 with Encore Theater reactivating May 8 with a performance by comedian Jo Koy. Spiegelworld’s trio of comedic variety shows — “Absinthe” at Caesars Palace, “Opium” at the Cosmopolitan and “Atomic Saloon show” at the Grand Canal Shoppes at Palazzo — don’t have dates at the moment, with company officials stating, “Spiegelworld’s top priority is caring for its staff as we navigate this rapidly changing crisis.”

SPI Entertainment’s five very different Strip shows are spread across three resort properties and are focused on returning in early May, according to founder Adam Steck.

“As it stands [March 20], we were given a return date of May 12 for all of our MGM shows,” he said about “Thunder From Down Under,” Hans Klok’s magic show and “The Australian Bee Gees show,” all at Excalibur, and Boyz II Men’s musical residency at the Mirage. “[We’re] still waiting for a definitive return date for Human Nature [at] the Venetian but we are hopeful and targeting May as their return.”

Steck said he was proud of all the performers, crew and support staff at his shows and how they’ve handled “this crazy, uncharted time. We are generally in contact with each other and spirits seem to be positive with the same notion that Vegas will come back tenfold when this situation passes.

“In the meantime we are discussing live-streaming jam sessions and other ways to make the best of this time and to do what we all do best, entertain and make people happy.”

If you’re holding tickets for a show for a show that’s been canceled or postponed, seek information or refunds from your point of purchase. And expect more changes to these prospective reopening dates as this fast-moving, erratic scenario plays out.