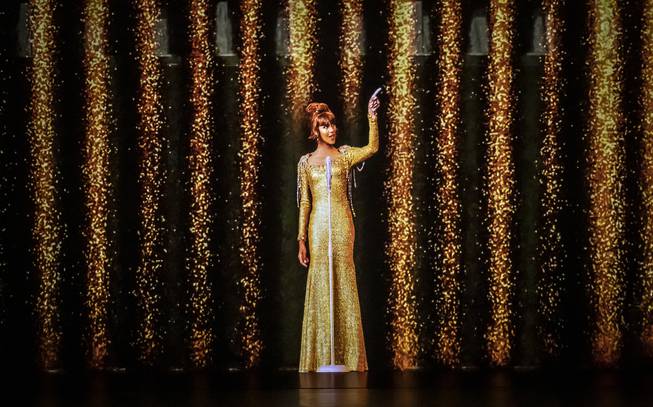 “An Evening With Whitney: The Whitney Houston Hologram Concert” is coming to Flamingo Las Vegas.

“An Evening With Whitney: The Whitney Houston Hologram Concert” will make its North American debut with an extended residency opening at Flamingo Las Vegas on April 14.

Produced and created Base Hologram — a branch of Base Entertainment which also produces Criss Angel’s “Mindfreak” show at Planet Hollywood, Thomas John’s new celebrity psychic medium show at Caesars Palace and “Magic Mike Live” set to re-open soon at the Sahara — the state-of-the-art show produces a “breathtakingly convincing hologram of the late, great American superstar,” according to a Telegraph review of “An Evening With Whitney.” It pairs Houston’s digitally remastered vocals with a live five-piece band, backup singers and dancers and features hits such as “I Will Always Love You,” “I Wanna Dance with Somebody” and “The Greatest Love of All.”

“In 2011, Whitney and I discussed her idea of an intimate, unplugged concert tour. It was a project we called ‘Whitney Unplugged’ or ‘An Evening with Whitney,” said Pat Houston, the late artist’s former manager and president and CEO of the Estate of Whitney E. Houston in the announcement. “While Whitney’s no longer with us, her voice and legacy will live on with us forever. (This) is another chance for us to relive and celebrate the talent that we were so lucky to receive for more than three decades and we’re excited to bring this cutting-edge musical experience to the fans who supported the pop culture phenomenon that was Whitney Houston, because they deserve nothing less.”

The Houston estate is partnering with Base on the project. The creative team includes lighting designer LeRoy Bennett, who recently worked on Lady Gaga’s residency show at Park MGM, and choreographer Fatima Robinson and musical director Keith Harris.

“An Evening With Whitney” will be performed at 7 p.m. Tuesday through Sunday at the Flamingo Showroom. Tickets start at $39 and go on sale on March 6.