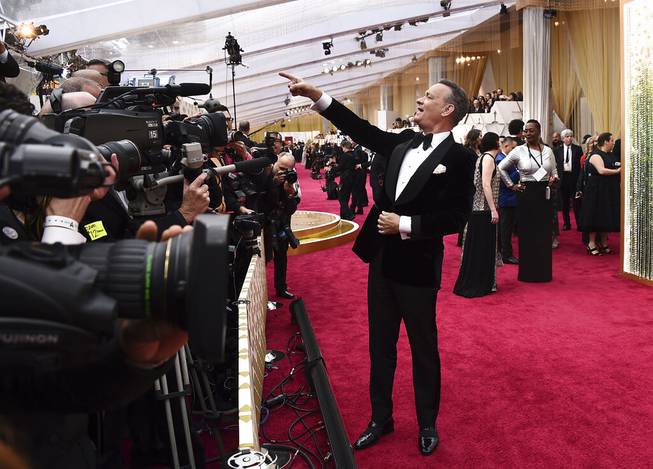 Tom Hanks arrives at the Oscars in Los Angeles on Feb. 9, 2020. Hollywood’s awards season has gone virtual. This time of year would normally be flush with splashy premieres, cocktail parties and star-studded screening. This year, Oscar campaigns are having to make do with virtual Q&As and home-delivered gift baskets.

NEW YORK — This is the time of year when Hollywood’s awards-season-industrial complex usually shifts into high gear. It’s a frothy, festive run of the year’s final premieres and screenings — all part of a carefully orchestrated dance to court tastemakers and, ultimately, academy voters.

The movies may be finished — picture locked — but their Oscar fortunes are in flux right up until ballots are cast. And a glittering, glad-handing ecosystem of cocktails and Q&As works very hard to steer the conversation.

This year, with many under quarantine, theaters shuttered in Los Angeles and New York and, well, some more pressing concerns than who’s campaigning for best supporting actor, awards season is operating in a strange COVID-19 vacuum with only a whiff of the stuff it thrives on: buzz.

For Awards Daily founder Sasha Stone, who has been covering the Oscars since 2000, it’s like nothing she’s ever seen — an awards season without glamour, without red carpets, without anything that feels real. She compares this year’s race to the floating debris left by a sinking ship.

“There’s no there there,” says Stone. “What’s missing is the ‘wow’ factor. That’s really what the Oscars have kind of been built on.”

Nevertheless, Oscar season is pushing ahead, despite the pandemic, despite a year where most of the biggest releases were postponed. The timetable has shifted two months: The Academy Awards are to be held April 25. And awards season, such as it is, has gone virtual. The Oscar race will Zoomed.

Awards campaigns normally focused on doing everything they can to lure guild members and others to see their film on the big screen have had to accept that this year they’ll be watching in their living room, maybe on a laptop, potentially with a lot of pausing and probably with many glances at their phone.

“The biggest challenge is: How are we going to get people to see the movies? Are they really going to watch them? What are they going to watch?” says Cynthia Swartz, one of the industry’s top Oscar campaign strategists. “Ninety-five percent of an academy campaign is getting people to see the movie, ideally on the big screen. Now you can’t get them to the big screen. Everyone’s seeing it at home.”

Keeping any movie not named “Borat” in the zeitgeist has been nearly impossible this year, either because people are overburdened by the pandemic, movies lack a physical presence beyond a box on your TV screen or because viewers would rather just binge “The Queen’s Gambit.” Swartz, who has helped steer campaigns for everything from “Boyhood” to “Black Panther,” acknowledged, “Right now, it’s hard for films to feel real and to feel like they’re sticking.”

The whole rhythm of the season’s calendar, from one awards group to another, is also off kilter. With Oscar nominations ballots usually due in early January, most voters plow through screeners over the holidays.

“It’s going to be a challenge to keep your movie sort of in the awareness all the way to April or to March, when voting happens,” said Tom Bernard, co-president of Sony Pictures Classics, whose contenders this year include the dementia drama “The Father,” with Anthony Hopkins. “It’s going to be a very different journey between now and the end of April.”

It has undoubtedly reshuffled the usual kinds of movies in the race. Many of the films that might have been among the favorites this year — Steven Spielberg’s “West Side Story” or Wes Anderson’s “The French Dispatch” — have been postponed. That’s left open leading positions for smaller films that might have had to fight harder for the spotlight — among them Chloe Zhao’s open-road ode “Nomadland,” Lee Isaac Chung’s Korean-American family drama “Minari” and Regina King’s fictional gathering of ’60s Black icons “One Night in Miami.”

For some, it’s a tantalizing possibility that this year’s unusual circumstances could expand the traditional notions — and frustrating restrictions — of what is an Oscar movie.

“It’s going to be interesting because there were no blockbusters. We didn’t have any blockbusters this year, so how do we know what was a hit. I’m curious if it will skew more indie-cinephile,” says Steven Soderbergh, whose Meryl Streep-led “Let Them All Talk” is among the many films going straight to streaming. “The question is: Do you embrace that and say: ‘That was this year,’ and not be pants-on-fire about it. Just go: That was this year.”

It’s also left the field for Netflix to dominate. The streamer, which has fiercely sought a best-picture win after close calls with “Roma”and “The Irishman,” this year has at least three best-picture candidates, including David Fincher’s “Mank,” Aaron Sorkin’s “The Trial of the Chicago 7” and George C. Wolfe’s “Ma Rainey’s Black Bottom.” One of few sure things is a posthumous nomination for Chadwick Boseman for his performance in “Ma Rainey.” This year, the film academy relaxed its requirement of a theatrical run for nominees — a change some are already lobbying to make permanent.

Last Oscars, the win for “Parasite,” the first non-English language film to take best picture, was heavily fueled by social-media support. This year, in the absence of real conversation, the race will likely be won online, making critics and pundits even more influential.

Not everyone is sorry that awards season — an increasingly bloated, overlong, high-priced slog from September to February — has been turned upside down. Publicists used to racing from event to event can do it this year with a click, while wearing sweatpants. Costs will be lower. Stars less worn out. Maybe, some hope, it will slim down for good.

Meanwhile, Zoom boxes are getting more dressed up all the time. For the launch of the black-and-white “Mank,” Netflix outfitted its video conference in handsome monochrome. For a Q&A for his dystopic space drama “The Midnight Sky,” George Clooney could track down a better-than-average moderator via video conference: Cate Blanchett.

The IFP Gotham Awards, one of the first big parties of the year, will livestream their Jan. 11 show from the cavernous Cipriani’s in Manhattan, with guests arranged virtually on tables. To pull off the digital trick, organizers are relying on an online poker interface. On the bright side, said producer Jeffrey Sharp, executive director of the Independent Filmmaker Project, more people will see the typically untelevised ceremony than ever before.

“If there are any lessons learned, we’re happy to pass them on to the next guy. I do feel like we’re all in this together,” says Sharp. “This year, everyone’s trying to figure it out, and I think deserves credit for at least trying to keep the ball rolling.”