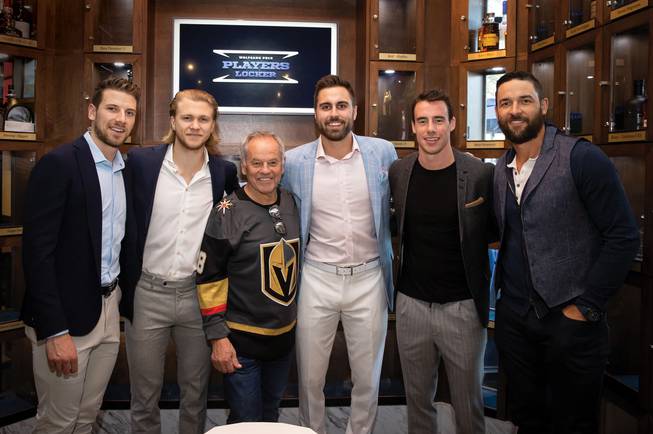 Celebrity chef, culinary industry titan and pioneering Las Vegas restaurateur Wolfgang Puck has been making headlines while lobbying for a federal bailout for the restaurant industry.

The Austrian-born mogul last week joined fellow star chefs Thomas Keller, Daniel Boulud and Jean-Georges Vongerichten — all of whom have operated restaurants in Las Vegas — on a conference call with President Trump to push for specialty stimulus relief for big fine-dining restaurants like his and smaller neighborhood restaurants struggling to survive through the coronavirus pandemic.

“We’re the biggest employer in the country, 15 and a half million people, the second largest after the government itself,” Puck told the Hollywood Reporter on Wednesday. “We need the ear of whoever is in the White House.

“I’ve been getting messages from employees and they say, ‘I’ve got to feed my family, what can I do?’ … All of these individuals are in real trouble. They don’t have a big savings account. Something like this has never happened before. When I get emails from people who’ve worked for me for so many years, I feel like I’m letting them down.”

Puck owns and operates dozens of restaurants around the world but only four are currently operating: two at the Marina Bay Sands resort in Singapore and two United States restaurants offering takeout and delivery services, Spago in Beverly Hills, Calif., and Wolfgang Puck Players Locker at Downtown Summerlin in Las Vegas.

“We are starting to process and fully take advantage of the new federal programs and the CARES Act that should allow us to keep our employees [paid] who are not working, and it appears we are going to be able to do that,” said Tom Kaplan, senior managing partner of the Wolfgang Puck Fine Dining Group. “It appears that [program] is going to be very helpful and we have a strong business structure in Las Vegas, but … I do worry beyond our group how that will effect smaller restaurants. For us [in Las Vegas] and for Wolf, we are deeply concerned not only for our own business but for the industry as a whole.”

Puck was one of the first prominent national or international operators to land on the Las Vegas Strip when he opened an outlet of Spago at the Forum Shops at Caesars Palace in 1992. His company has expanded its presence in the Las Vegas Valley through the years and currently operates six restaurants on the Strip and in Summerlin. Five are company-owned, with Spago at Bellagio owned by MGM Resorts International and managed by Puck’s group; that restaurant’s workers are MGM employees.

Las Vegas Sands announced on Friday it would pay more than a thousand third-party restaurant workers at its Strip resort properties Venetian and Palazzo, including Puck’s CUT steakhouse and Solara poolside café. The program will cover payroll expenses for salaried employees at restaurants and a weekly stipend for hourly and part-time workers.

In addition to specific federal aid for restaurants, Puck and his colleagues are lobbying the government and the insurance industry to allow business interruption claims associated with pandemic-caused closures. Such claims are currently reserved for restaurant closures caused by fires or natural disasters.

“That’s a big discussion. If the government does get behind that the way they did after September 11, that can make or break a business, even when we come out on the other side of this,” Kaplan said. “That’s where Wolf has really been pushing and others are using their celebrity status to pressure insurance companies to recognize this is indeed a business interruption event and they are responsible on some level for compensating.”

Kaplan has been working with Puck for almost 40 years and has lived in Las Vegas for almost 30 years. While the Vegas branch of the company is filtering relief efforts to its employees and attempting to calculate the business impact of this crisis in the short, mid- and long terms, it is also communicating with and supporting other local hospitality operators, he said.

“Myself and David Robins (managing partner, operations and corporate chef) are always on the side getting calls and I think that will increase as we get more [information],” Kaplan said. “Just as there is universal support in the scientific community to find a cure, all working together, the restaurant business is the same thing. We’re all in this together. We’ve always been happy to open our doors for [Las Vegas] and answer any questions we can and this is no different. We love this community and if people ask if we can help, we’re going to help.”

Prominent chefs and restaurateurs from across the country are holding a teleconference briefing today to raise awareness of the plight of independent restaurants and call on Congress to take action to ensure their industry’s survival. Founding members of the Independent Restaurant Coalition Tom Colicchio, Naomi Pomeroy and Kwame Onwuachi are expected to explain how the recently passed CARES Act fails to meet the needs of independent restaurants that have been closed or restricted as a result of the crisis.

The coalition released a statement last week declaring that short-term relief available through the CARES Act’s Paycheck Protection Program will be insufficient to support independent restaurants and their 11 million-plus workers. “Unemployment claims will continue to increase the longer restaurants are unable to open,” reads the statement. “There are over two million waiters and waitresses, 261,000 dishwashers and 296,000 hosts and hostesses in America and every restaurant that shuts its doors leaves them out of a job. Not to mention, we employ tens of millions more Americans through a vast supply chain of other local businesses, including farmers, fishermen, beverage distributors, linen services, and so do many others.”

The coalition was created out of a grassroots movement to secure protection for independent restaurants and workers impacted by the coronavirus pandemic. It claims nearly 500,000 independent restaurants that contribute close to $1 trillion to the national economy. The U.S. Department of Labor’s Bureau of Labor Statistics reported that two-thirds of jobs lost in March came from the hospitality sector and more than half were food and beverage jobs.

More information about the Independent Restaurant Coalition can be found at saverestaurants.com.