RuPaul’s Drag Race Live opens. The Vegas version of the hit TV show took over for Donny & Marie in the Flamingo Showroom in January.

Garth Brooks plans Allegiant Stadium concert. The country megastar was set to open the $1.9 billion venue on August 22 but was forced to postpone the concert, now scheduled for February 27, 2021.

Extravaganza opens. A new showgirl-laden homage to all things Vegas was staged just once at the classic Jubilee Theater at Bally’s in March, before the pandemic shut down the Strip. Extravaganza was one of the few large-scale productions to reopen in the fall, with limited capacity audiences. 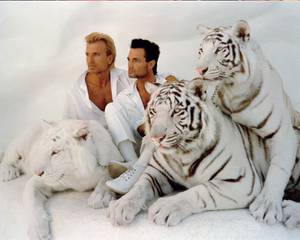 Roy Horn dies. The legendary illusionist and animal lover, who paired with Siegfried Fischbacher to help reinvent Vegas entertainment, died from complications of COVID-19 in Las Vegas on May 8.

Human Nature leaves Venetian. In June, the Australian singing group signaled the end of its seven-year run at the Sands Showroom and began looking for a new home on the Strip.

Allegiant Stadium opens. The Las Vegas Raiders played their first home game on September 21—without fans in the stadium but with The Killers performing (prerecorded) at halftime, on Monday Night Football.

Zumanity concludes its run. Cirque announced in November that the sexy, 17-year resident production at New York-New York won’t be back, but that the company’s other Strip shows will return when viable. -Brock Radke

Eric Vozzola and his Area15 mural

Area15 opens. The otherworldly arts and entertainment complex began its first phase in September with a unique mix of immersive art installations, sculptures, shopping, food and drink, rides, murals, ax throwing (!) and more. We’re all awaiting the next phase, when its Meow Wolf exhibit opens in 2021.

The arts world goes online. In 2020, innovation was the name of the game: Zoom plays and Facebook live storytelling by A Public Fit and Poor Richard’s Players; livestream concerts by Las Vegas Philharmonic; video tours of art galleries, virtual residencies at the Rogers Arts Loft and online classes at Open Art Las Vegas. Creators kept creating—just not in person. To all those writers’ groups, book clubs and play readers meeting faithfully online, we salute you.

Believer Magazine teaches drawing. Every week, a different artist shares their talents as part of the free, online Friday Night Comics workshop. Watch in real time or binge them all later at believermag.com/comics-workshops.

Black Mountain Institute gets an on-air book club. As part of the Nevada Reads book club, BMI produced Severance Radio, on which a who’s who of the state’s literati discussed Ling Ma’s novel, Severance, at blackmountaininstitute.org/severance-radio.

Broadway in the H.O.O.D. celebrates 10 years. Live performances might be limited by COVID-19, but that can’t take away from the incredible legacy created by this nonprofit organization, which helps at-risk youths access theater.

Marjorie Barrick Museum of Art launches a pandemic drawings project. With exhibitions nixed by the shutdown, the UNLV venue’s curators pivoted to a collaborative project, A Drawing a Day Keeps the Pandemic Away, inviting the public to respond to daily prompts and post art on Instagram. The result is a stunning and timely nine-volume archive, viewable at digitalscholarship.unlv.edu/barrick_drawing.

New murals cover the Valley. The naturally socially distanced art form bloomed in 2020, with highlights including Nanda Sharifpour’s light installation at Soho Lofts; an array of murals at the former Moulin Rouge casino; Eric Vozzola’s back wall at Area 15; and Camila Magrane’s “Transmigrations” at Downtown Grand.

Nevada Ballet Theatre connects through Instagram. Unable to perform at the Smith Center, NBT performers took to the social media platform, bringing fans into their lives and taking the beauty of dance beyond the stage. -C. Moon Reed